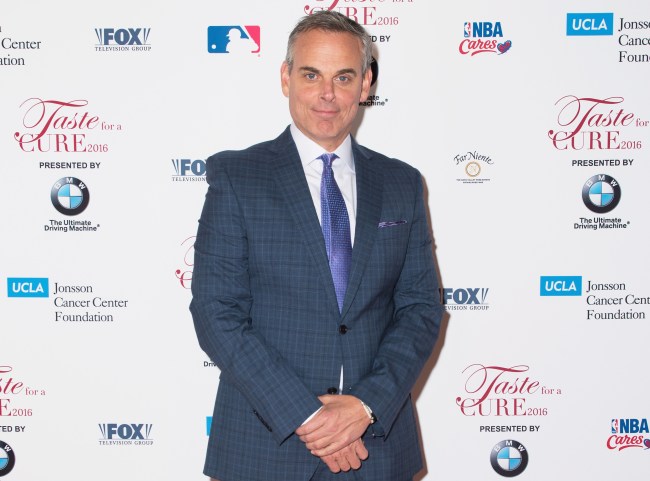 Outspoken FS1 host Colin Cowherd typically fires off his opinions without much thought going into them, usually just trying to upset the masses. For the most part, it works well for him, and Cowherd gets crazy amounts of attention for dropping the hottest of takes about trending sports topics.

Every once in awhile, though, Cowherd hits the nail on the head — and one of those times happened Wednesday when he started talking about college Pro Days that take place leading up to the NFL Draft.

With the NFL Draft now less than a month away, every single team is starting to disguise the prospects that they’re really most interested in. We get smokescreens about the quarterbacks a coach loves or hates. We have no idea what trades might occur. We hear about front office executives overthinking things. And, of course, we get the media gushing about some of the prospects absolutely murdering their Pro Day performances.

LSU WR Ja’Marr Chase is ridiculously talented! His 41-inch vertical and 11-foot broad confirms the lower-body explosiveness we all see on tape. I’ll be shocked if he gets past Miami at No. 6 (and reuniting with Burrow in Cincy at 5 is a legit possibility).

Just this week, NFL fans have heard about Florida tight end Kyle Pitts showing out, Ohio State quarterback Justin Fields proving his athleticism, and LSU wideout Ja’Marr Chase lighting it up for scouts. But does it really mean much? Not according to Colin Cowherd, who slammed the media hype by saying that the more attention a player gets after his college Pro Day, the more Cowherd dislikes him as a prospect. Take a look below at the full video segment.

"Anybody notice the least talked about pro day so far? It's Trevor Lawrence — easily the best prospect. Do you remember anything about Andrew Luck's pro day? I loved him, I don't."

There aren’t many times I find myself agreeing with Colin Cowherd, but, in this instance, he’s absolutely correct. I mean, does anybody really give a damn that a quarterback prospect can heave a ball 70 yards? Sure, people on Twitter who like to gawk. But NFL teams shouldn’t use that as a barometer when determining if the guy should be a top-10 pick. Likewise, just because a wideout or running back flies in the 40-yard dash doesn’t mean he’ll become a perennial Pro Bowler. Yet, every single year, social media blows up about performances at certain Pro Days.

To echo Cowherd’s point about all of this, most times, it’s the player nobody is talking about leading up to the NFL Draft that ends up becoming the most consistent. We all know that Trevor Lawrence is going No. 1 overall to the Jaguars, so there’s no drama surrounding him. That’s a good thing, and allows him to just complete the process without doing something that goes viral during his Pro Day workout.

Like it or not, Pro Days are nothing more than a glorified backyard game of touch football, where top quarterbacks have a scripted plan to show-off their strengths, and skill position players train to showcase their athleticism. That’s great for some scouts and NFL teams to see, but, as we’ve seen with busts like Johnny Manziel and others, it often doesn’t translate to success in the league. After all, over the past 15 years, every top prospect usually gets rave reviews in his Pro Day, but not all of those prospects end up being superstars. So be wary of buying too much into the hype before the NFL Draft, guys.