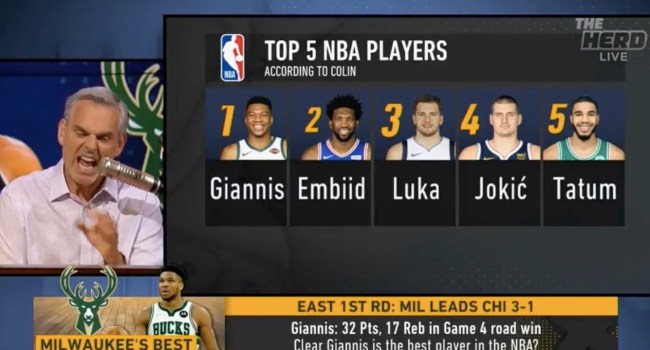 Being in sports talk radio or television is such a strange gig. You’re literally paid to churn out opinions without any regard for how accurate those opinions are. Why? Because attention spans are minuscule these days — no one remembers what nonsense Stephen A. Smith or Colin Cowherd said last week because they’ve already said dozens of ridiculous things since then.

However, thanks to accounts like @BackAftaThis — who famously patrolled and reposted Mike Francesa’s nonsense for many years — sports fans are now able to hold these talkshow hosts more accountable.

Take Colin Cowherd, for example, arguably the most brazen of the sports talk B.S. artists in the game today. There’s a reason @BackAftaThis has pivoted to covering Cowherd’s lies, after all.  During Monday’s episode of his show, as the first round of the NBA Playoffs winds down, Cowherd listed his Top 5 “25 or under” players in the NBA: Giannis, Joel Embiid, Luka Doncic, Nikola Jokic, and Jayson Tatum.

The problem with Cowherd’s list, though, is that only two of these players are actually under 25: Luka Doncic and Jayson Tatum. Giannis Antetokounmpo (27), Joel Embiid (28), and Nikola Jokic (27) are all older than the 25-years-old benchmark that Cowherd was arbitrarily discussing.

It should be noted that Devin Booker — who averaged 26.8 points per game this year as he led the Phoenix Suns to the NBA’s best record — did not make Cowherd’s list despite actually being 25-years-old. Ja Morant, who has revitalized the Memphis Grizzlies franchise to the tune of 27 ppg in just his third season, also didn’t make the cut. Neither did the likes of Trae Young or Anthony Edwards. Keep an eye on young up-and-comer Joel Embiid though, everyone!