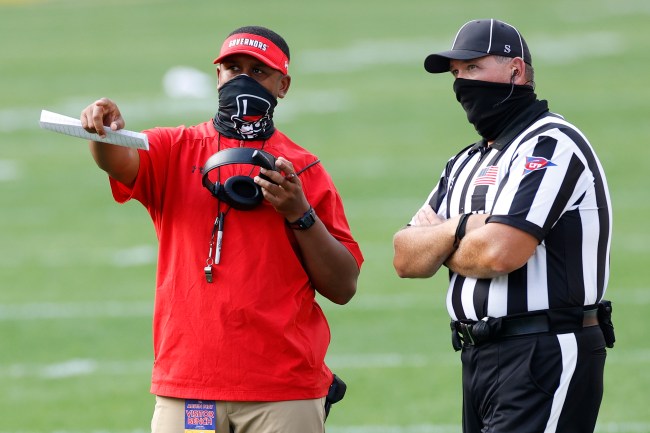 The college football season is upon us, with most of us partaking in sweatpants Saturdays (or maybe it’s just me?), and sitting around doing nothing but stuffing our faces with beer and pizza each weekend day. It’s a glorious time to finally have something to do as this fucking pandemic rages on.

While things just kicked off for most college football teams this past weekend, one team, Austin Peay University, is already calling it a season after just three games — and lots of money coming in to get beat up by some bigger schools — making a wise business decision to play a few games to rake in some cash before looking towards a spring schedule. Here’s the tweet the team’s official Twitter account posted.

According to Saturday Down South, Austin Peay, which actually won 11 games in the FCS in 2019 and reached the league’s quarterfinals in the postseason, decided to axe their fall campaign after getting blown out by Central Arkansas, Pittsburgh and Cincinnati by a collective score of 134-37. In the Pitt game, there was even a running clock, hoping to make the embarrassment as easy as possible for Austin Peay.

But with the FCS looking to have a spring football season this year — which Austin Peay hopes to play in — the team decided it’d go get its ass kicked by a couple big boys before taking the fall and winter off, making out with some serious money for the Athletics Department in the process.

Per the Pittsburgh Post-Gazette, the Pitt was supposed to host Miami (OH) in its season opener, and pay the small school a cool $1.1 million, but was left searching for a last-minute cupcake after the MAC postponed its fall season. Enter Austin Peay, which happily took some money; although it’s unknown if it was the same amount offered to Miami (OH).

With so many universities losing money and even cancelling other sports without revenue from college football games this fall, Austin Peay’s move to pretty much just show up and get ragdolled all over the field for three games seems like a bold business move. Now they’ve got at least six months to lick their wounds, count their dollars and hope they can bounce back in the spring to contend for a FCS playoff spot again.