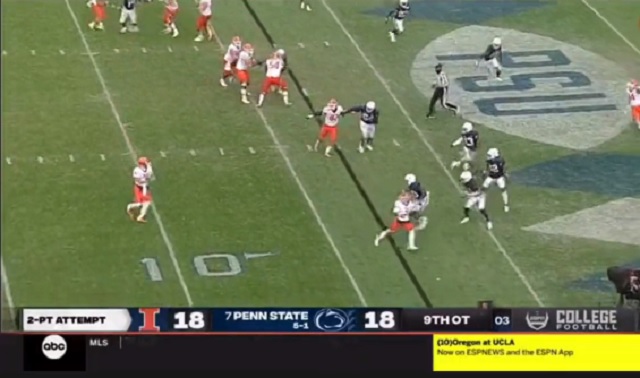 College football’s new overtime rules were tested during the Illinois-Penn State game on Saturday, and the rules committee might have to tweak some things for future seasons.

New to 2021, teams will participate in a two-point shootout, and alternate running two-point conversion plays from the 3-yard line starting in the third overtime period.

Unfortunately, Illinois and Penn State went 0-5 during the two-point shootout before a team scored, and fans were miserable.

Hopefully after watching that debacle of a display of #CollegeFootball , the #NCAAFB rules committee will vote to eliminate OT two-point shootout rules starting with the third overtime. That was ridiculous and just terrible to watch. #CFB #ILLvsPSU #B1G #ACC #Big12 #Pac12 #SEC

This is pathetic going up the middle. Two-point conversion shootout seems stupid to me https://t.co/DRhZhD1QVQ

The whole purpose was for "player safety." Ironically, this Penn State-Illinois game has actually gone on longer than it otherwise would have because of the two-point shootout format. https://t.co/ZtAVvItPK6

The new overtime rules are supposed to shorten overtime games. 😂

They said the new rule was made to shorten the game and reduce fatigue and injuries, and I don't think it did either lmao

Illinois was finally able to win the game in the ninth overtime for the upset win.

So after watching that mess, we’re all good with a rule change that keeps regular OT for four overtimes before the two-point conversions start in the fifth, right?