College Football Lock Of The Week: Texas Tech vs. Kansas 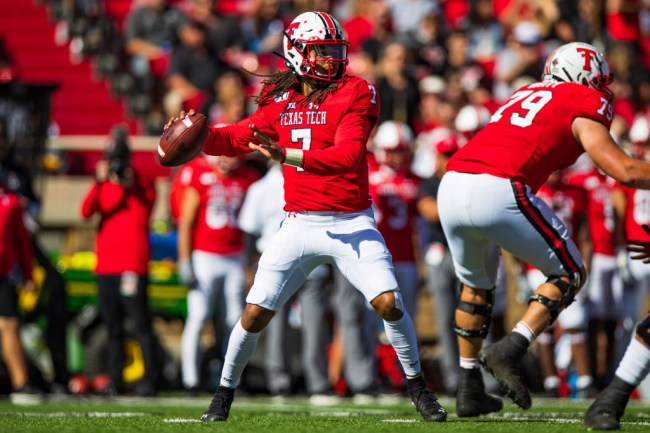 There are plenty of games each and every week on the college football slate that jump out at you making it that much harder to pick just one game each Saturday. In this weekly series, we’ll circle a single game, break down the matchup and lay out the evidence as to why this is the lock of the week.

Last week we circled Tulane vs. Memphis and the Tigers came through for us yet again as they routed the Green Wave 47-17 easily covering the spread (-4.5, Memphis). This week we’re picking an under-the-radar game in the Big 12, Texas Tech vs. Kansas.

These two teams could very well be the two worst teams in the Big 12 come the end of the season, but that shouldn’t shy you away from picking this game. Both teams enter this matchup on losing streaks with the Red Raiders dropping two straight and the Jayhawks losing four straight.

Texas Tech is simply a better football team and its bowl chances are very much still alive with a favorable schedule down the stretch, but if they fall this weekend those bowl dreams pretty much go out the window. I think that does factor into this game, in a minor way, but it’s still an edge.

When you look at both of these team’s just flat-out bad defenses, this game screams shootout. Texas Tech ranks 109th in yards allowed per game allowing 451 yards while Kansas’ defense is 121st in the country allowing 472.1 yards per contest.

Texas Tech’s defense has been swarming to the football as of late with 13 turnovers created of its last five games, but the Red Raiders have cashed in just 26 points off of said turnovers. Texas Tech is +5 in the turnover margin department this season while Kansas is -3.

With both teams having bad defenses, the attention has to turn to playmakers and Texas Tech quarterback Jett Duffey will be the top playmaker on the field on Saturday.

I don’t see him or his top target T.J. Vasher slowing down in any way against the Jayhawks.

It may seem too simple to break things down by just circling Duffey as the difference-maker, but when you’re discussing two bad football teams with two atrocious defenses you have to zero-in on the fact one team’s quarterback is the best playmaker on the field. Also, I’ve kept things a bit more simple over the last three weeks and I’m 2-1 with my picks.

Duffey and the turnover creating Texas Tech defense get the job done in Kansas and cover the spread easy this Saturday.