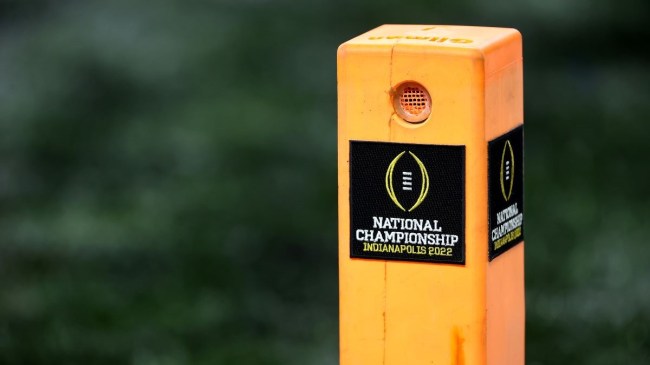 The College Football Playoff is expanding. That much we know. The initial expectation was that the format would expand from a four-team playoff to a 12-team playoff in 2026. But recent updates tend to indicate that the switch could come as soon as 2024.

Now, however, it appears that College Football Playoff officials may have hit one very big, very financially strong snag in their plans.

Ross Dellinger of Sports Illustrated reports that the NFL’s scheduling has thrown a wrench into the plans of the CFP committee.

The NFL has continued to add unique dates to its schedule in recent years. It began with Christmas Day games and most recently continued with the announcement of a Black Friday game in 2023.

Traditionally, Black Friday has been reserved for college football. But as the NFL switches its scheduling landscape, it causes headaches for members of the College Football Playoff committee.

Executives are fed up.

It’s the NFL vs the CFP. They’ll be going head to head some.

The 2024-25 versions of the CFP will look drastically different than 2026/beyond.

A move-up of the regular season starting as soon as 2026 will allow semis to be played on NYD & the first two rounds to be played in December. That's at least the goal.https://t.co/bXK7qon4JS

“You’re just trying to minimize all the ways the NFL will f— you,” says one top CFP official.

The CFP Management Committee, the 10 FBS conference commissioners and Notre Dame athletic director Jack Swarbrick, met for seven hours on Thursday in Dallas in yet another attempt to finalize details of the new 12-team playoff. And while the NFL’s takeover of Black Friday has no impact on expansion playoff games, it’s another dagger from the big league fired at its little brother.” – via SI.com

Dellinger reports that the committee seems to be getting closer to solidifying the details of the new format. But the deadline is fast approaching to put it in place in order to have a 12-team playoff in 2024.

There was, however, some good news Thursday. Commissioners emerged from their exhaustive meeting with optimism that they can expand by 2024 or ’25, the earliest years possible. That said, the window is closing quickly, and there are still plenty of issues beyond the NFL, explored here by SI. A decision must be made soon on 2024.

Now it appears that whether they like it or not, college football will have to take the NFL head-on if it wants the expanded playoff to work.