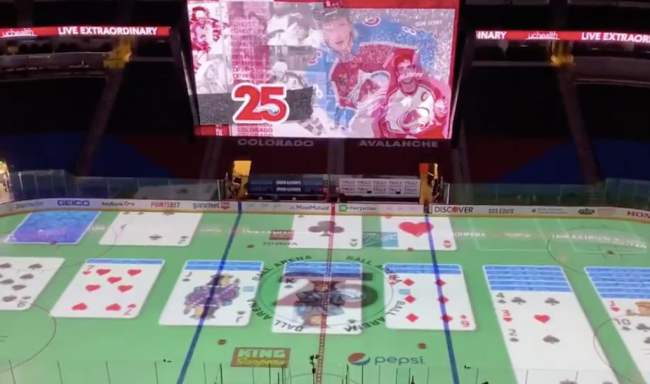 Earlier this month, The New York Times took a closer look at the economic impact the pandemic has had on the people who rely on doing things like stacking bowls on their head while unicycling and balancing small children in the palm of their hand to make a living, as there’s currently no need for NBA teams to hire anyone to entertain fans at halftime when there aren’t any fans to entertain.

While cheerleaders and mascots still grace the sidelines at many sporting events, we now live in a world where there’s a noticeable lack of people winning $25 gift cards by answering trivia questions in between innings at minor league baseball games and fistfights sparked by shirts emblazoned with the logo of a local credit union fired into the stands with an air cannon.

However, as the production crews inside the bubbles the NHL constructed in Canada last year proved, you can still have a little bit of fun during breaks in the action, and based on what we saw when the season kicked off on Wednesday, at least some people behind the scenes are carrying that torch into 2021.

The Avalanche kicked off their season in Denver last night, and while they ultimately lost to the Blues, the real winner was whoever was responsible for projecting a game of solitaire onto the ice in between periods. Sadly, we don’t have a full clip showing how things ultimately played out, but this is still far more entertaining than it has any right to be.

Sure, it’ll be nice to eventually get back to a point where fans have the chance to win a Ford F-150 by shooting the puck through an impossibly small hole from the opposite side of the rink, but I’d be lying if I said I hope stuff like this goes away when the world gets back to whatever we’re going to eventually consider “normal.”