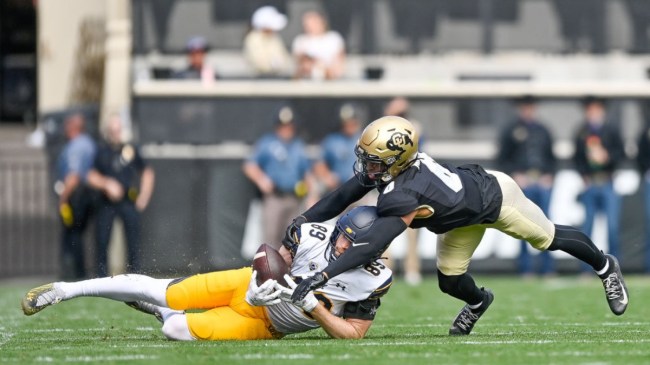 It looks like Deion’s new team was paying close attention to his first speech.

Coach Prime made his intentions perfectly clear to Colorado’s players during his first speech to the team.

In that introductory speech, Sanders told players to be ready to “jump into the portal”.

It didn’t take very long for the first player to take his advice. Just one day later, the team had its first entrant into the transfer portal. The player that decided to transfer was quarterback Owen McCown, who is the son of former NFL quarterback Josh McCown.

McCown knew he wasn’t going to have a chance to compete for the starting next season as Sanders had already announced that his son would be coming with him from Jackson State to be Colorado’s starting quarterback.

Now a player who started for Colorado last season has joined McCown in the transfer portal.

Colorado CB Kaylin Moore is in the NCAA transfer portal. Started 14 games for the Buffaloes.

Moore didn’t record an interception for Colorado this season, but did have 35 tackles on the season.

Sanders already had his work cut out for him to try and reshape a Colorado defense that allowed the most points per game in the country last season at an unbelievable 44.5 points per game. Now he’ll have some extra work to do as he trie to replace one of the starters from that defense.

Luckily for Sanders, corner is not a position he should have trouble recruiting as one of the greatest corners to ever play the game.

With how quickly Colorado has already had a couple of players make their way to the transfer portal, it will be interesting to see how many more respond to Deion Sanders’ first speech by joining.