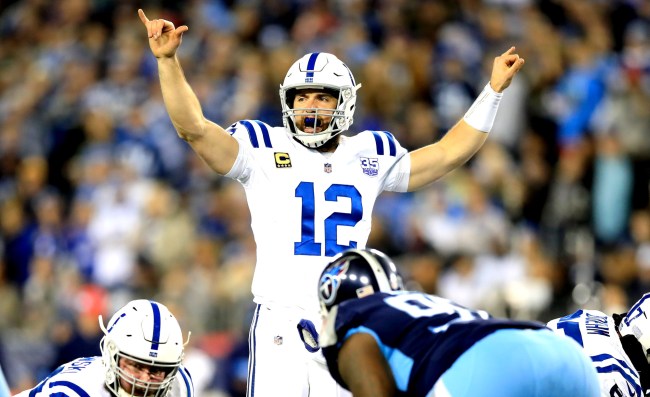 With Indianapolis general manager Chris Ballard saying recently that “the jury is still out” on Jacoby Brissett being the starting QB next season, Colts fans are rightfully wondering what exactly is going on with their team.

The 27-year-old Brissett ended the 2019 season with 2,942 yards passing, 18 touchdowns, six interceptions, and a 7-8 record as the Colts’ starter after jumping out to an impressive 5-2 start.

He will also be making “just” $7 million in 2020, so the idea of him being the team’s backup QB is not out of the realm of possibility.

Colts fans, still reeling from the extremely unexpected retirement of their franchise quarterback Andrew Luck at the age of just 29-years-old, keep hoping he will change his mind and return to the fold – something his dad XFL Commissioner Oliver Luck claims is highly unlikely.

The Colts do own the 13th pick in the upcoming 2020 NFL Draft so they could ride with Brissett for one more year while as they groom a rookie to take over in 2021.

However, the team’s owner Jim Irsay, who has been known to go off the rails on social media (and elsewhere), made Colts fans all over the place think that he was hinting at Andrew Luck’s return with a random tweet he fired off this past Saturday.

He does know that the word luck does not require captilization, right? I mean, he has been running a 2.7 billion dollar NFL franchise since 1996, after all.

Irsay then wrote in a follow-up tweet, “… be careful when and where you use capital letters… they can be ‘ misconstrued ‘….”

… be careful when and where you use capital letters… they can be “ misconstrued “….

He capitalized Luck twice this mean he’s coming back??????

Why Would you capitalize Luck?? Not once, but twice

Irsay then followed up completely screwing with Colts fans’ heads by tweeting even more nonsense.

….”…Someone’s got it in for me; they’re planting stories in the Press… Whoever it is; they better cut it out quick…but when they will… I can only guess…”. Zimmerman!!!?!?!

WHAT. IS GOING ON. IN INDY?