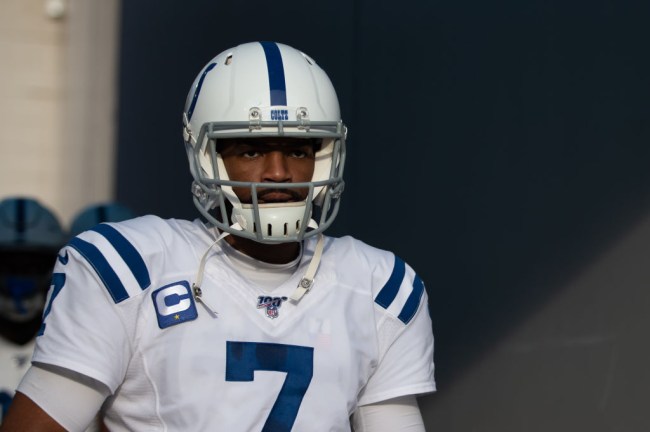 The Colts found themselves in a rather unique and tough spot at the start of the NFL season after Andrew Luck shocked the world announcing his retirement from the league.

Jacoby Brissett stepped into the starting quarterback role and got off to a quick 5-2 start, but finished the year on a bad note as Indianapolis went 1-5 down the stretch. The 27-year-old finished the year with just under 3,000 yards passing to go along with 18 touchdowns and six interceptions in his 15 appearances.

The Colts signed Brissett to a two-year extension back in September which will see him make $7 million in 2020, which is a team-friendly deal that makes it easy to keep him on the roster, but it doesn’t mean he’ll be the starter come the beginning of next season.

Indianapolis general manager Chris Ballard was asked about Brissett’s future as the team’s starter, and he didn’t necessarily offer a vote of confidence that he’s guaranteed the spot in 2020. In fact, he flat-out said that ‘the jury is still out’ on his being Indy’s starter.

Ballard on Brissett: "The jury is still out, that's why we did the short term deal with Jacoby. But, for now, yes, he is our starting quarterback."

That’s probably not what you want to hear from your general manager if you’re Brissett, but you have to tip your cap to Ballard for being completely honest about the situation.

Indianapolis holds the 13th overall pick for the upcoming NFL Draft and it wouldn’t come as a shock to anyone if it decided to select a quarterback. Brissett has shown he’s an entirely capable quarterback in the NFL, plus he put up the numbers he did without T.Y. Hilton for a good chunk of the season, but a legitimate quarterback competition may find its way to Indy if the Colts land a quarterback at the NFL Draft or possibly free agency.