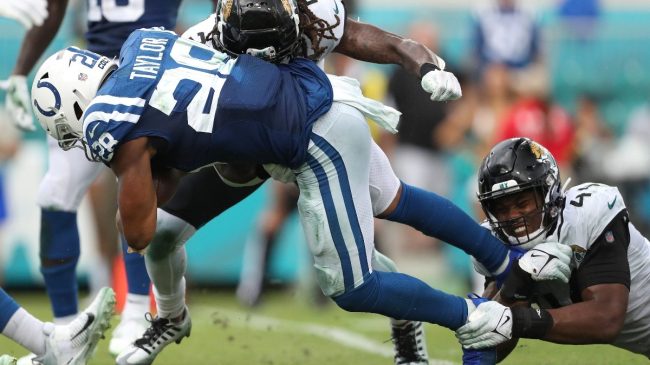 After being hyped up throughout most of the offseason, the Indianapolis Colts have found themselves with a putrid 1-2-1 record. Many believed that Matt Ryan was the missing piece but he hasn’t quite looked like himself. Meanwhile, Jonathan Taylor has been surprisingly absent in three of the four games. Now, the organization reveals exactly why they can’t run the ball.

According to James Palmer, there are numerous factors in play as to why Indianapolis is struggling so hard in the run game. Palmer claims that the Colts have indicated that communication has been lacking so far this season. A lot of that falls back on the quarterback, which means Matt Ryan holds some of the blame.

The other reason is the Colts believe that Jack Doyle’s retirement has played a key part in the run game being what it is now. The blocking tight end served as an extra offensive lineman throughout his career. His absence is rather noticeable, as Jonathan Taylor hasn’t quite looked the same this year.

What’s wrong with the #colts running game? It even surprised the #Broncos coaching staff when they watched the film. Here’s what I gathered as to why. My report on NFL NOW on @nflnetwork pic.twitter.com/lfKuh1dTUO

At the end of the day, Indianapolis must improve in the rushing game. Otherwise, they have no chance of making a playoff push later in the season. Jonathan Taylor is the driving force for the Colts and he can’t get going right now. Perhaps Matt Ryan’s communication improves, which could help out in a major way.

Until then, the Colts might be on the struggle bus until they figure it out. Jonathan Taylor is ruled out for Week 5 but the franchise is hopeful he can return for Week 6. Expect to see Nyehim Hines and Phillip Lindsay in the backfield on Thursday Night Football.