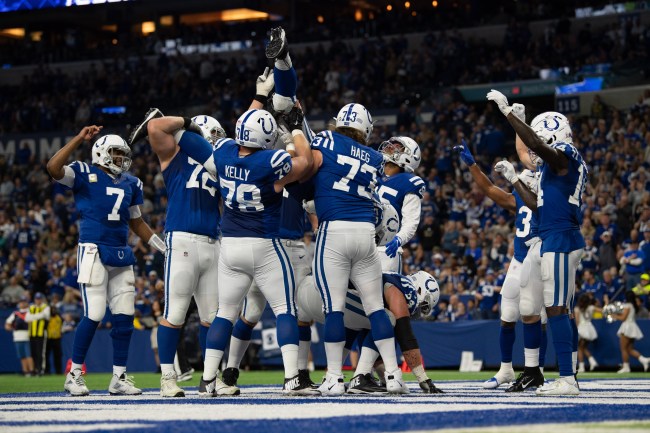 If you weren’t watching Sunday’s game between the Jaguars and the Colts then you might have missed out on the greatest touchdown celebration the league has seen in years, the now infamous ‘Keg Stand TD Celebration’.

The Colts were up 10-7 at the half and looking at a 3rd-and-goal on the 1-yard-line when they gave the ball to former Notre Dame All-American turned 2018 NFL First-team All-Pro offensive lineman Quenton Nelson who thought he’d crossed the goal line and scored a token ‘Big Guy TD’ after one of the officials signaled a touchdown (it was later waived off). The big guy TD is always fun but it’s even better when they bust out a choreographed touchdown celebration that changes the game as we know it.

MUST WATCH: The story behind Quenton Nelson's LEGENDARY keg stand touchdown celebration.@BigQ56 breaks it all down for me post game. #coltswatch8 pic.twitter.com/BNWLUZbIqE

Here’s a breakdown of his comments from the IndyStar just in case you’d rather read than listen to that short clip:

When asked about the inspiration for the celebration, Nelson said, in true Quenton Nelson form, “A keg stand.” When asked for his beer of choice, fittingly, the blue collar mauler said, “Bud Light.”

“We didn’t practice it for at least three weeks or more, but when we knew Quenton’s number was going to be called, we knew we were going to do the keg stand,” Glowinski said. (via)

He weighs THREE HUNDRED AND THIRTY POUNDS so hoisting him up for a keg stand and getting him into position is no easy feat.

Here’s that Keg Stand celebration so you can watch it on repeat all day long:

Quenton Nelson just scored a one-yard touchdown and then did a kegstand celebration with the entire OL, we have a new MVP candidate