Colts WR Michael Pittman Jr. Is Not Giving Up His Jersey Number For Carson Wentz 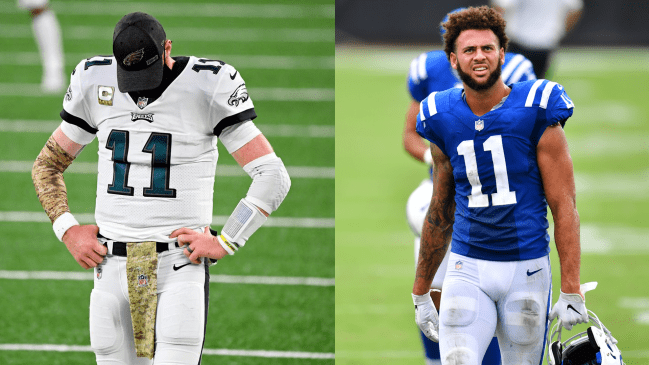 Carson Wentz will be wearing a different number when he steps onto the field with the Colts this year. The 28-year-old quarterback was traded to Indianapolis last week and has worn No. 11 since his days at North Dakota State— but that number is already taken by second-year wide receiver Michael Pittman Jr.

When a player joins a new team and wants a number badly enough, the previous wearer often times will hand over the rights to the veteran or the veteran will offer to pay for it. However, Pittman Jr. spoke to TMZ Sports about his conversation with his new signal-caller and it doesn’t appear as though there is any way that he is going to relinquish his No. 11 jersey.

No sum of money is of interest to the Los Angeles native.

While the 23-year-old has zero plans to give up the number, there isn’t any bad blood between the two.

“I spoke to [Carson] and he was just seeing how locked in I was to No. 11, and I told him I was locked in — and he was like, ‘That’s cool, bro, because I’m probably gonna switch anyway,’” he said. “He asked me very respectfully and I just appreciated him for that. I think he’s a great dude, because lots of guys with his status, they would come in and demand and stuff like that.”

To say that Wentz has enough “status” to step into a new organization and demand the number change might be a stretch, but Pittman Jr.’s intentions are good with his comment. Considering that all signs indicate that Wentz wasn’t particularly well-liked in the Eagles locker room, it might be for the best that he didn’t fight Pittman on it.

The former Southern California pass-catcher wore No. 6 in college but took over the No. 11 jersey as a rookie last season. He caught 40 passes for 503 yards and a touchdown in 2020 and is poised for a breakout year if Wentz and he develop a rapport.