Conor McGregor’s Coach Reveals Who Will Be In His Corner, Sugar Ray Leonard Offers Some Advice 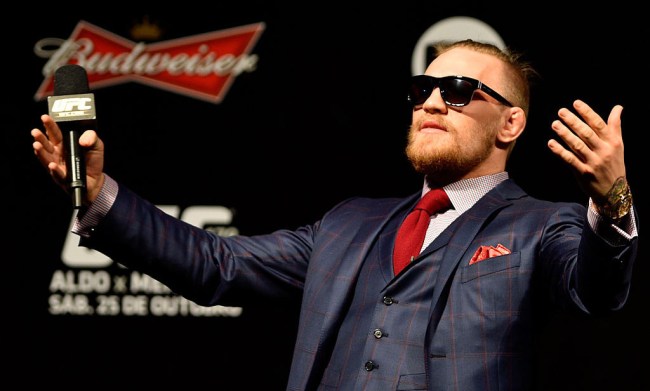 When Conor McGregor steps into the BOXING ring on August 26th to fight one of the greatest boxers of all time Floyd Mayweather who will be in his corner? Will it be his usual coaches and trainers from the UFC or will there be a different group of handlers since McGregor will only be allowed to box? (Or get sued.)

On Monday, McGregor’s boxing coach Owen Roddy spoke with Ariel Helwani on The MMA Hour and answered that question and more. Turns out that McGregor will be surrounded by many people he knows very well from his tremendously successful UFC days.

The names are familiar ones for UFC fans: McGregor’s head coach John Kavanagh, Roddy, UFC fighter and longtime training partner Artem Lobov and a spot still up in the air.

“At the moment, it’s going to be me, John, possibly Artem and I think there’s four,” Roddy said. “Obviously he’ll have to get his own cut man and stuff like that. He hasn’t sorted that just yet. But it’ll definitely be myself, John and Artem at the moment.”

None of those names have real boxing experience, with the possible exception of Roddy. But then again, neither does the Irishman McGregor who will be 0-0 as a pro going into the bout with Mayweather on Aug. 26 at T-Mobile Arena in Las Vegas. Mayweather, meanwhile, is 49-0 and regarded as the best boxer of his generation. McGregor is the UFC lightweight champion and former featherweight champ.

“We’re not bringing anybody in as of yet, but who knows down the line,” Roddy said. “We’re gonna head over the states in the next couple of weeks. But at the moment, we’re in Dublin, we’re all working together. We came up with a game plan that we think can shock the world and we’re gonna stick to that for the time being.”

So how Roddy sees the fight going down?

Of course he HAS to say that.

Another person interested in the Mayweather vs. McGregor fight, legendary boxing champion Sugar Ray Leonard, who beat Floyd Mayweather, Sr. back in 1979, may have offered McGregor the best advice of all when he was asked about it on Monday… “DUCK!”

I still think/hope the fight goes down a little something LIKE THIS.

This would also work…