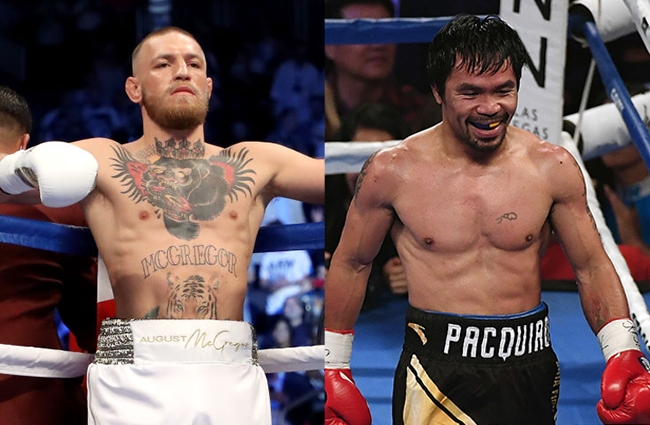 In 2008, Floyd Mayweather Jr. announced the first of what would turn into a steady stream of retirements and put a squash on the rumors he’d be stepping into the ring to face off against Oscar De La Hoya for a second time, which opened the door for another boxer to ascend to the throne the undefeated fighter vacated.

Manny Pacquiao was seen as the most likely successor and he cemented his status as the man to beat when he bested De La Hoya after Mayweather backed out. His profile only rose from there as he continued to rack up victories that made a bout between him and a swiftly unretired Mayweather virtually inevitable.

The boxers’ camps kicked off negotiations in 2009 but the talks were repeatedly stalled by disagreements over drug testing and how to split the purse. However, the seemingly endless back-and-forth finally ended when they agreed to step into the ring in 2015 for an infinitely hyped match.

When everything was said and done, Mayweather added another win to his spotless record in what would have easily been the fight of the decade if it wasn’t for some guy named Conor McGregor.

The MMA star had already proved his worth in the UFC and somehow managed to convince himself he’d be a worthy adversary for the most dominant force in boxing over the past couple of decades. He eventually managed to goad Mayweather out of his second retirement and the two men generated an unparalleled amount of buzz as millions of people tuned in to watch McGregor get punched in the face a bunch until losing by TKO.

It didn’t take very long for the Irishman to start pushing for a rematch, and while he challenged Mayweather to meet him in the Octagon, he spoke with ESPN earlier this week and admitted it doesn’t appear that fight will ever materialize.

McGregor is currently focusing on his return to MMA, but that said, he’s still open to stepping back into the boxing ring and it appears he’s exploring other options if Mayweather continues to drag his feet by setting his sights on Manny Pacquiao.

According to Business Insider, the fighter revealed he’s been in contact with Pacquiao’s camp while speaking to reporters during a press conference ahead of his match against Donald Cerrone at UFC 246 this weekend.

“With Manny Pacquiao, talks have been ongoing. An aspiration of mine is to win a boxing world title. It would be a phenomenal feather in the cap and is something I will achieve.”

Just got this mock poster from @KnuckleheadSean who is the head of MP Promotions for Senator @MannyPacquiao So I'm guessing the Senator has heard that @TheNotoriousMMA is interested in fighting him and is interested. pic.twitter.com/odEwLoDHDg

This probably won’t be as much of a cash cow compared to McGregor’s inaugural boxing match but I’m still going to pay too much money to watch it if it ends up coming to fruition.