Conor McGregor Claims Floyd Mayweather Jr. Backed Out Of A Rumored UFC Fight But Says He Still Wants A Rematch With The Boxer 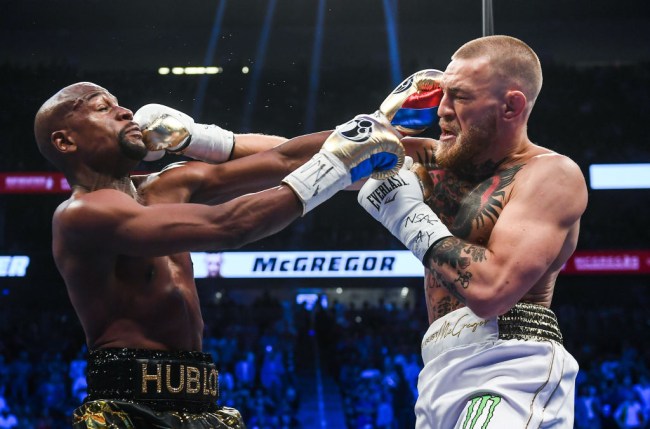 In 2015, Floyd Mayweather Jr. finally faced off against Manny Pacquiao after years of negotiations in what was one of the most hyped fights the boxing world had seen in recent memory. However, the man who eventually won that bout would go on to outdo himself in a big way just a couple of years later when he agreed to step into the ring to fight Conor McGregor.

There were plenty of boxing purists who thought the mere idea of having an MMA specialist face off against a fighter who’d competed professionally for over 20 years without losing a match was a mockery to the sport but Mayweather was more than happy to block out that criticism by stuffing his ears with some of the insane amounts of cash he knew the spectacle would generate.

Mayweather appeared to be the clear favorite on paper and he lived up to expectations once things got underway, as he was never in any real danger during the ten rounds it would ultimately take him to secure the victory via TKO.

It didn’t take long for the Irishman to challenge the boxer to a rematch but he asserted it was only fair for Mayweather to visit his home turf by stepping into the Octagon, and after it was reported negotiations for a UFC fight were underway, Mayweather went on record as saying the rumored showdown would be the only thing that could lure him out of retirement.

Last year, McGregor suggested Mayweather was to blame for the stalling of those talks while boldly claiming he’d come away with the W if he had a chance to box him again, and now, it looks like that may be the only way we’ll get to see the two men trade blows a second time.

According to Complex, the UFC star paid a visit to Ariel Helwani’s MMA Show ahead of his contest with Donald Cerrone at UFC 246 on Saturday to shed some light on how things currently stand with Mayweather and said he’s still angling to get a second shot in the ring as the boxer reportedly explores his options concerning potential opponents that could get him to come out of retirement for the 17th time.

McGregor also said he’s come to terms with the reality that a UFC fight isn’t in the cards while calling out Mayweather for backing out of his promise to step out of his comfort zone.

Would McGregor vs. Mayweather II be as unevenly matched as their first rumble in the ring? Almost certainly. With that said, it would absolutely print money for all parties involved so something tells me it’s only a matter of time until it becomes a reality.