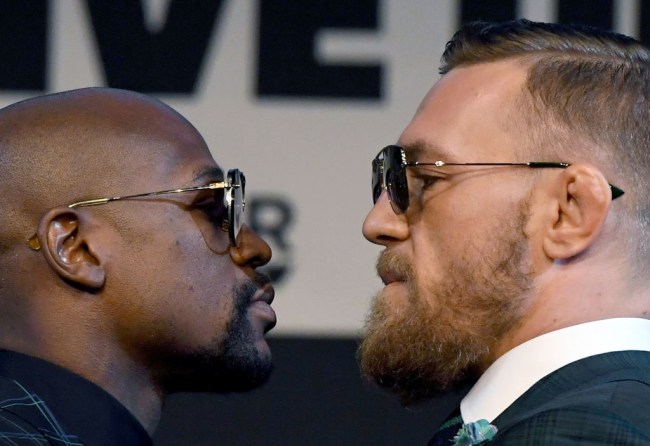 Last year, Conor McGregor decided it would be a good idea to trade in the Octagon for a boxing ring and go toe-to-toe with one of the most dominant fighters in the sport in recent memory. Most experts predicted the Irishman would fare about as well against Floyd Mayweather as the goat in Jurassic Park did against a Tyrannosaurus Rex, and to his credit, McGregor put a fight before going against all conventional wisdom and letting his opponent punch him in the head a bunch.

Mayweather was able to successfully defend his home turf, and a few months later, McGregor decided he deserved the same opportunity. Since then, rumors have been swirling about a potential rematch under MMA rules, and Dana White has done everything he can to increase production at the rumor mill. Last week, Mayweather added some fuel to the fire when he posted a picture of himself at a UFC gym and earned a vintage McGregor reply for his troubles.

Now, it appears the undefeated fighter and the UFC are getting closer and closer to making the matchup happen. Gareth A. Davies recently appeared on talkSPORT and reported plenty of people in Mayweather’s camp are engaging in discussions in pursuit of making this guaranteed cash cow a reality (he predicts the fight could rake in upwards of $500 million.

On Wednesday’s installment of UFC Tonight, White emphasized the rematch will only happen if Mayweather is willing to enter the world of MMA, which I’m sure has nothing to do with the payday would come with the faceoff:

“Obviously, the only way making that fight again makes any sense is if he comes over to the Octagon. We went over and boxed him, the UFC and Conor McGregor. And now it’s time for him to reciprocate and come fight in the Octagon.”

I look forward to counting down the days until I get the privilege of paying $100 for a stream that probably won’t work again.