A Delusional Conor McGregor Made A Very Bold Claim While Challenging Floyd Mayweather Jr. To A Rematch 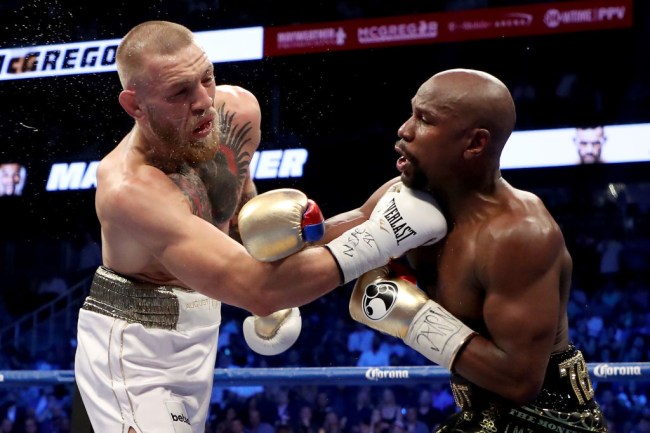 There was no reason to believe Conor McGregor was going to be able to beat Floyd Mayweather Jr. when he agreed to step into the ring and fight on the boxer’s home turf in 2017.

Sure, McGregor had established himself as one of the most dominant names in MMA but that doesn’t mean much when you’re sacrificing the majority of your skillset and facing off against a boxer with a 49-0 professional record.

The fight may have generated an insane amount of hype but it didn’t really manage to live up to it at the end of the day. Mayweather was more than happy to let McGregor tire himself out over the first few rounds before going on the offensive and eventually ending things via TKO in the 10th.

After the match, McGregor extended an invitation to Mayweather to meet him in the Octagon but the boxer’s focus seems to be on spending boatloads of money in retirement as opposed to fighting.

The Irishman, on the other hand, has spent the past couple of years dealing with various legal issues and getting his ass handed to him by Khabib Nurmagomedov, who made easy work of the fighter when they faced off at UFC 229 in October amidst a vicious war of words.

It’s currently unclear what’s next for McGregor but it’s no secret he’d like a shot at redemption against either man, and according to TMZ, he’s got Mayweather back in his sights based on comments he made in a recent interview with Tony Robbins.

McGregor took some time to reflect on the fight during the discussion and shed some light on what led to his defeat, saying he thought he had the advantage in the early rounds before Mayweather switched up his style and got aggressive.

The fighter claims he never heard back from Mayweather’s camp concerning a UFC fight but asserts he’s more than open to another boxing match, saying, “I know I would win.”

Sure, there’s no real reason to believe things would end any differently the second time around but I’m sure the tens of millions of dollars he’d make for simply stepping into the ring would serve as a satisfactory consolation prize.