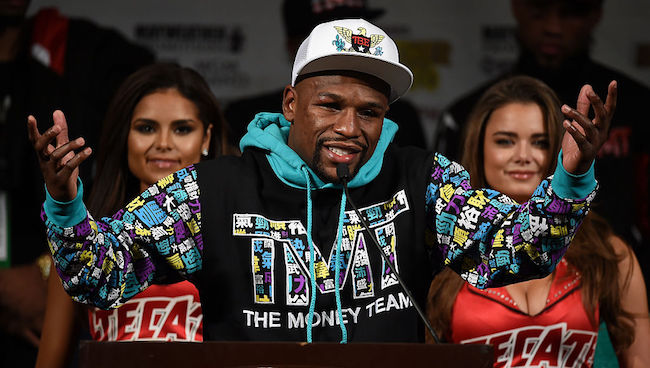 Last year, Conor McGregor agreed to leave The Octagon and step into the ring with Floyd Mayweather in a bout that resulted in him getting punched in the face a bunch before the undefeated boxer won by a TKO. The boxer and perpetual retiree said that the fight would be his last as a boxer, but the 41-year-old has hinted that he’s interested in a rematch on McGregor’s own turf.

Negotiations for a UFC match against the Irishman are reportedly already underway, and while Mayweather has previously said that he and his family are basically set for life, he— like most people— is a fan of lots of money. He’s already started training in an MMA gym (a move that was met with mockery from McGregor), and if his recent comments are to be believed, the only way we’ll see Mayweather fight again is in the UFC.

Mayweather appeared on Showtime on Saturday and poked fun at himself for “retiring” as many times as he has and said that the only way he’d fight again is if it’s in The Octagon.

"If I do come back, it has to be in the octagon. – @FloydMayweather #LaraHurd pic.twitter.com/hGOxMMMdil

It can be assumed that the only way he’d compete in an MMA fight is if it’s against McGregor, who might have put a bit of a kink in the plan when he decided to go apeshit at the Barclays Center ahead of UFC 223. Dana White denied McGregor’s temper tantrum wasn’t a publicity stunt, and while McGregor was arrested, he hasn’t been suspended (presumably because White is also a fan of lots of money).

I for one can’t wait to spend $100 for a matchup that will probably last 20 seconds.