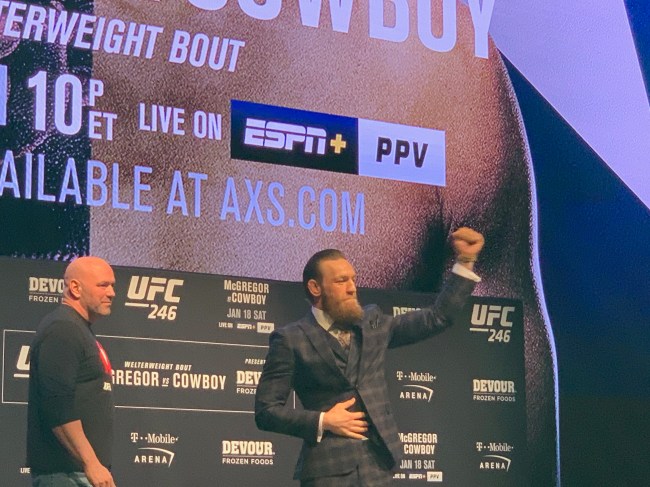 Squaring off for the first time at the Pearl Theater at the Palms Casino, UFC 246 PPV headliners “The Notorious” Conor McGregor and Donald “Cowboy” Cerrone engaged in one of the more civil and jovial press conferences of McGregor’s career. There were no insults, no throwing of Monster Energy cans, no Proper Twelve Irish Whiskey, no slaps. There wasn’t even a smidgen of trash talk, which may have left plenty of MMA fans confused, given McGregor’s place as the master of mental warfare.

It was so cordial, in fact, that it felt like a bizarre way to kick off a Conor McGregor fight week, but in the end the most important thing is that “The Notorious” and “Cowboy” are in Las Vegas and they have both promised a rockem sockem standup affair to close out the UFC 246 Pay Per View main card on ESPN+.

Having attended more than a dozen McGregor press conferences, it was instantly clear that there’s been a remarkable change in “The Notorious.” For starters, he was on time to the event, which is something that basically never happens with Conor. He’s a diva’s diva, and the king of showing up late, so the fact that the press conference started at the scheduled time was already a tell that this is a new and improved McGregor. Or maybe he’s just finally put batteries in any one of his massive, jewel-encrusted watches.

Once the press conference began, McGregor addressed the media head on, reiterating the message he’s been spitting all week:

“I’m more grown, more experienced, and been through things that have shaped me,” expressed McGregor who added that he’s “more focused this camp and a bit more aware … I definitely feel reenergized and refreshed.”

McGregor also confirmed the physical transformation that we alluded to last week, at one point stating “[I] reshaped my frame.” He also identified exactly where he feels he can beat Cerrone inside the Octagon. “I certainly feel I will have the speed advantage,” added McGregor.

Hinting at his intention to fill in for either UFC lightweight champion Khabib Nurmagomedov or challenger Tony Ferguson, should either one withdraw from their UFC 249 bout in April, McGregor also mentioned the possibility of making a quick turnaround to headline UFC 238 in Las Vegas in March. Then he continued to discuss the possibility of a boxing match with Manny Pacquiao or Floyd Mayweather for the new Zuffa boxing brand, but shut down the idea of cutting down to featherweight, a division he once ruled, to take on new champion Alexander Volkanovski, who won the title in December at UFC 245.

In general, it was mostly charismatic business talk …

However, McGregor did get a few pot shots at his real adversary: PETA, the People for the Ethical Treatment of Animals, who have given him, and presumably Cerrone, an earful for their continued use of exotic skins and furs, previously slamming McGregor, Mayweather, and the WBC for The Money Belt which was made from an entire alligator.

“PETA they’re coming for me too,” remarked McGregor. “We don’t want trouble with PETA … they’re a shady crowd apparently.”

It was good to see McGregor shifting gears and inserting some of his off-brand humor into the fight conversation. He even had a good jab at “Cowboy” stating that “I can read Donald like a children’s book,” to which Cerrone replied “he can read me so we’ll see. Hopefully he got some hooked on phonics.”

But it was a far cry from the McGregor who stole Jose Aldo’s and Eddie Alvarez’ belts prior to UFC 194 and UFC 205, slapped Nate Diaz’ fist in the faceoff before UFC 196, and went after Nurmagomedov’s country, religion, and family in the lead up to UFC 229. It was an entirely new gear, and one that we haven’t seen from Conor before.

It’s still unclear exactly what this new, kinder persona will mean come Saturday, January 18, when McGregor steps into the Octagon to face Cerrone in the UFC 246 PPV main event on ESPN+, but after three years of losing and legal troubles, anything new is likely a good sign for “The Notorious.”

He’s focused on the fight itself, which is in stark contrast to his last UFC appearance, which essentially served as a marketing platform for Proper Twelve Irish Whiskey.

And, as McGregor himself said, “sometimes we need to go to certain places in our life to realize what we need to do … I’ve turned over a new leaf.”

Whether that new leaf includes knockout power at welterweight remains to be seen. We’ll all just have to wait until Saturday night to find out.