Conor McGregor Looks Unrecognizable In Halloween Pics With His Mom, Who Appears To Be Wearing Blackface 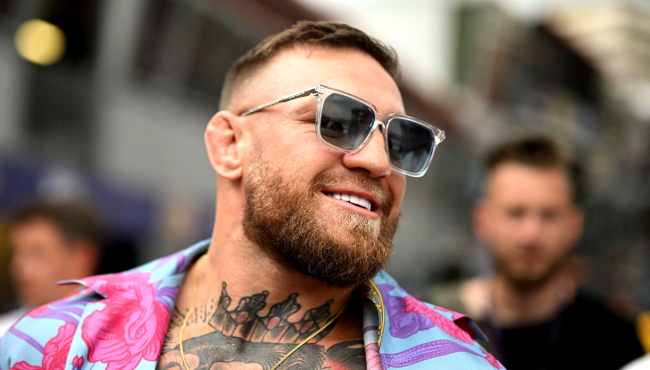 Count former UFC champ-champ Conor McGregor among the many celebrities and athletes who got dressed up in costume for Halloween.

“The Notorious One” not only put on a Halloween costume, he also made himself barely recognizable by shaving his trademark beard.

Joined by his wife Dee Devlin who was dressed up as a flight attendant, McGregor celebrated Halloween by dressing up as an airline pilot as the couple celebrated the holiday with their three kids.

McGregor’s mom Margaret also joined the couple and their kids in a couple of the photos. She too was in costume, dressed up in a red dress, a necklace with three skulls hanging from it, and her face painted with what a flood of people on social media said appears to be blackface.

“Is no one talking about the woman dressed in blackface?????????” one person commented on Instagram.

“Is that…blackface? What is going on with that?” someone else questioned.

“Nobody else seeing the black face paint on the lady at the end? Wtf?” asked another person.

Conor McGregor’s mom also appeared in her costume in a since-deleted Instagram story posted by his sister Erin.

“Mad Magzer loving the Halloween vibe,” the post was captioned.

“The McGregor family loves Halloween,” a spokesman for the McGregor family told the Mirror. “Mrs. McGregor had spiders painted on her face since her costume was a ghoul risen from the grave. Any other interpretation was just wrong and truly unfortunate.”

“In the bank, I’m heavy in the bank I am!” Conor clarified.

McGregor has been spending a lot of time recently in the Dominican Republic shooting scenes for the remake of the classic film Road House starring Jake Gyllenhaal.

He hasn’t given up on a return to the octagon, however.

Since breaking his leg in horrific fashion in his last UFC fight with Dustin Poirier, McGregor has been hitting the weights hard.

While he may not be 265 pounds now, Conor is definitely looking bigger than ever.

McGregor has stated that he is shooting for an early 2023 return to the UFC, but since he is currently out of the United States Anti-Doping Agency’s testing pool, he hasn’t been tested this year and can’t fight again until April at the earliest. The USADA requires fighters to be in the testing pool for a minimum of six months except under “exceptional circumstances.”