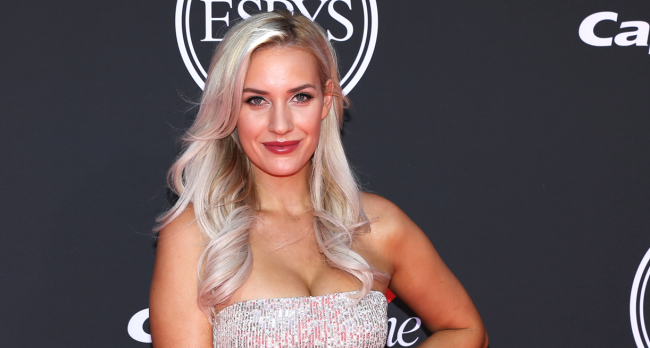 Thanks to Halloween, we got to see a lot of our favorite people in the world of sports rocking some excellent costumes.

LSU gymnast Olivia Dunne as a dark angel, Lane Johnson wearing a Jason Kelce outfit, Camille Kostek and Gronk dressed up as Ken and Barbie, and Paige Spiranac as a character from Street Fighter II.

Some people like Joy Taylor and Spiranac wore more than one Halloween costume this year.

Because she is such a sports nut and with the World Series between the Phillies and Astros taking place, Paige Spiranac also graced her fans with some photos of her wearing a baseball outfit.

It was while wearing that outfit on Halloween that Spirac, in full Halloween mode, dropped a video ranking the five scariest athletes of all time.

Happy Halloween! I rank the scariest athletes of all time🔥 pic.twitter.com/O9LRyzInk3

“Known for terrorizing opposing offenses, coming in at number five is James Harrison,” Spiranac begins her list. “I saw him at a Whole Foods once and he was HUGE! It was quite scary.

“Scaring batters and birds, we have number four Randy Johnson,” she continued. “6-foot-10 lefty, I do not want his… balls… comin’ at me?”

You will have to watch the video to find out who she ranks first through third.

In a new edition of “Basics with Paige,” Spiranac recently shared a some handy tips (as she often does for golf) for watching baseball including defining some of the unique terms used in the sport.

In that video, Spiranac, who threw out the first pitch at a Brewers game this summer, defined baseball terms like slugger, cleanup hitter, and frozen rope.

“Since the World Series is right around the corner, let’s talk about some baseball basics,” Spiranac explained to start the video.

She also went through many of the different terms that get used for a home run, including bomb, moon shot, and dinger, and what the words “bag” and “lumber” mean in baseball.

Luckily for both the Phillies and Astros, Paige Spiranac’s baseball outfit isn’t associated with either team.

Fans of the Los Angeles Rams and Cincinnati Bengals are very aware of how that turned out for their teams.