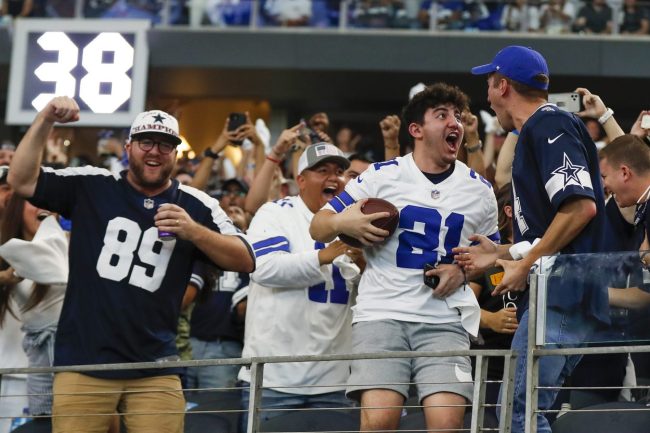 The Dallas Cowboys are set to host the San Francisco 49ers in the Wild Card round of the NFL Playoffs at 3:30pm CT. Two hours prior to kickoff, the team opened its door to fans and it was utter chaos.

Video of the fans rushing into AT&T Stadium to secure the best standing room tickets for the game is absolutely insane. It looks like a Best Buy on Black Friday if you were to multiply the mayhem by twenty.

In the video, you can see a sea of both fanbases lined up at the door. When the doors open, hundreds — if not thousands — of fans rush into the mezzanine toward the standing room areas.

Obviously, those who have tickets seats can stay outside and enjoy the tailgate for awhile longer, knowing their spot in the stadium is secure. That is not the case for the standing room folk and they went full Hunger Games mode.

AT&T Stadium doors have opened for Cowboys vs. 49ers pic.twitter.com/OtewlvaL82

After San Francisco fans took over Los Angeles for the final game of the regular season last week and created a raucous away environment, Dallas fans were sure to get their tickets early. As a result, more than likely, 49ers fans were largely relegated to standing room only tickets.

At least, that is what it would appear based on the amount of red in the videos from the door opening on Sunday afternoon. Either that, or there is going to be a lot of Bay area faithful cheering on their team in Dallas later today.

Take notice of the amount of red jerseys:

The doors are open at AT&T Stadium pic.twitter.com/lJogmAmEBA

Here was the scene prior to the 2021 Wild Card game against the Seahawks:

NO MATTER WHAT IT TAKES, YOU GOTTA GET THE BEST VIEW!!!