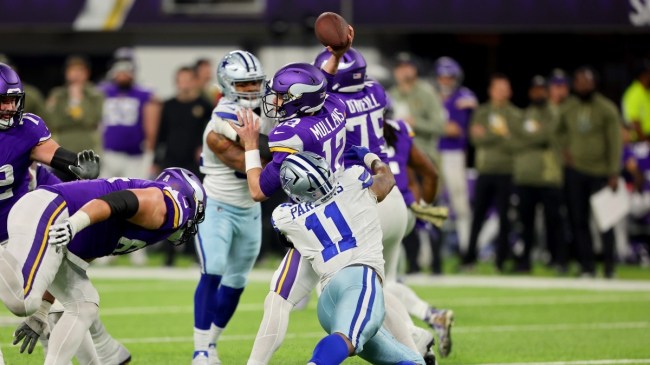 The Dallas Cowboys have been playing on Thanksgiving Day since 1966. The team, along with the Detroit Lions, has been synonymous with the massive American holiday for decades. And, this year’s game for the Dallas Cowboys (7-3) is a big one. They welcome the 7-3 New York Giants to AT&T Stadium in the second of three NFL games today.

Two of the biggest stars for these Cowboys are linebacker Micah Parsons and defensive end Demarcus Lawrence. Parsons is the overwhelming favorite to be the league’s defensive player of the year due to his versatility and pass-rushing ability. And, Lawrence has been one of the league’s best edge players for nearly a decade now.

Both were in jeopardy of missing the Turkey Day clash. And now, we know what their status will be.

Both were listed as questionable, but Sports Illustrated gave them some big news. Credit goes to Madeline Coleman of SI and Ian Rapaport of NFL Network.

Micah Parsons and DeMarcus Lawrence are reportedly expected to play against the Giants https://t.co/OYO34Lh6P9

Get ready, Cowboys fans, two of your star defenders are reportedly back.

NFL Network’s Ian Rapoport reported on Thanksgiving morning that Micah Parsons and DeMarcus Lawrence are expected to play against the Giants on Thursday afternoon despite both being listed as questionable. Parsons has been dealing with ankle and knee injuries while Lawrence reportedly has a stress fracture in his foot.

During Dallas’s Week 11 win over Minnesota, Parsons briefly exited in the second half for a knee injury but he re-entered, later saying his knee was “cool.” The linebacker didn’t participate in Monday’s practice but moved to limited on Tuesday and Wednesday.

Lawrence’s injury, though, is related to his injury from last season, which he underwent surgery for due to a fracture. Rapoport reported Thursday that the two-time Pro Bowler “already has a screw in it and had surgery in the past on both fifth metatarsals.”

That’s a huge boost for a team that will need to shut down Giants’ star running back Saquon Barkley. And, with both teams pursuing free agent wide receiver Odell Beckham, the game has even higher stakes.
The game will kick off at 4:30PM on Fox.