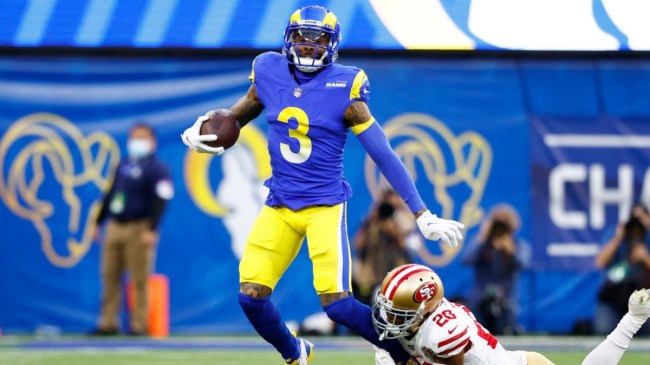 After months of no movement on a potential Odell Beckham Jr signing it now seems like everybody is actively recruiting the recovering receiver.

Saquon Barkley has talked to him. Von Miller has been recruiting Odell since the summer. Now a quarterback on a team that has been regularly linked to Odell has revealed that he’s been doing his part to recruit the receiver.

Dak Prescott told reporters that he has reached out to Odell and let him know how much the Dallas Cowboys want him.

#Cowboys QB Dak Prescott told reporters today that he's reached out to free agent Odell Beckham Jr. and let him know how much they want him in Dallas for the stretch run.

The Cowboys sure didn’t look like they needed help on either side of the ball this weekend. They absolutely destroyed the Minnesota Vikings on Sunday, claiming a 40-3 win in Minnesota.

However, even in such a dominant win their wide receivers weren’t really much of a factor. Running back Tony Pollard led the team in catches and receiving yards and scored both of the team’s receiving touchdowns. Meanwhile, CeeDee Lamb was the only receiver with more than 3 catches in the game.

The Cowboys will need more out of the position down the stretch in matchups with the Colts, Titans, and Eagles who all won’t make it easy for their running backs. They’ll also likely run into some defenses during the playoffs that will make it difficult for the Cowboys to lean on the run game and Dak will need targets he can depend on.

With Beckham coming off of another leg injury and having not played since February, it’s hard to know exactly how much of an impact he could have down the stretch, but he would certainly at least be worth a pickup for the Dallas Cowboys.