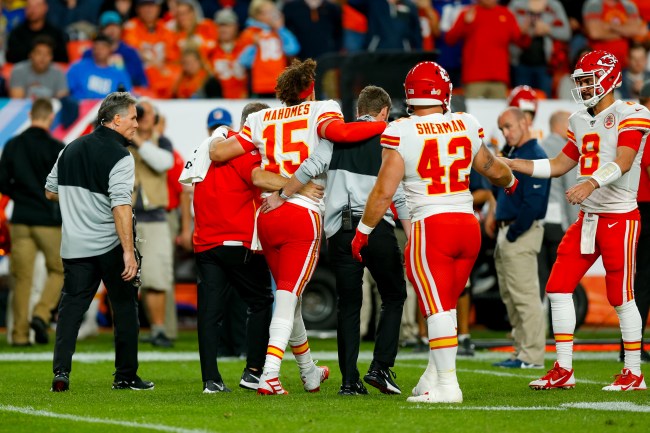 It was exactly seven days ago when Patrick Mahomes dislocated his kneecap against the Broncos in pretty gruesome fashion. His own teammate Travis Kelce said Mahomes’ knee didn’t even look like a knee and trainers were forced to pop it back into place right there on the spot.

Fast forward six days to the following Wednesday and Mahomes was back at practice with the Chiefs, which surprised most. On top of that, Kansas City head coach Andy Reid has yet to rule him out for Sunday night’s contest against the Packers and that has caused a media whirlwind.

Cris Carter seems to think he’ll be on the field Sunday night.

During a segment on First Things First, the Hall of Famer even went as far as to say he would be ‘shocked’ if Mahomes doesn’t play against Green Bay.

We all want to see an Aaron Rodgers – Patrick Mahomes showdown, but throwing what we can only presume to be a not 100 percent healthy Mahomes on the field seems like a bad idea. I think getting your MVP quarterback healthy before the back-end of the season should be priority No. 1, not leaning on him and his banged-up knee for a Week 8 matchup.

We’ll likely get more information on whether or not Mahomes is expected to either suit up or play on Sunday later on in the week.