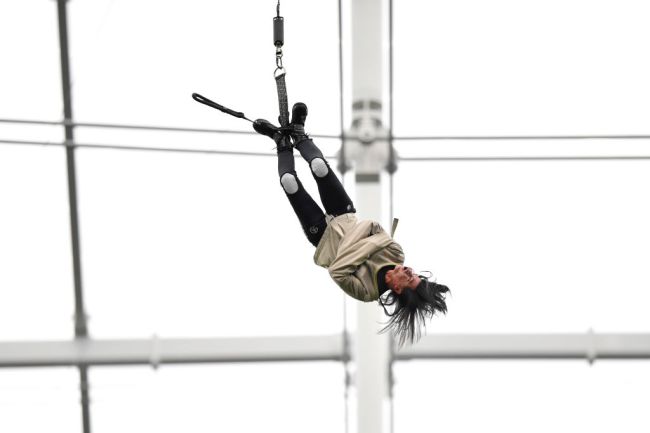 Las Vegas does it bigger and flashier than any other city in the country. Thus, when the Raiders decided to make the move from Oakland, it was sure to come with plenty of pomp and circumstance.

That was the case on Sunday when legendary illusionist Criss Angel performed an extremely dangerous and historic stunt.

Beyond the massive state-of-the-art stadium with all of the bells and whistles, and the literal nightclub in the end zone, Vegas has one of the most unique game day experiences in the country. An hour before kickoff on Sunday, it brought a taste of “The Strip” inside Allegiant Stadium.

Angel, who is headlining down the road at Planet Hollywood, was strapped into a straitjacket, hoisted above the stadium and attempted to escape. To further bridge the gap between the Raiders and its city, team owner Mark Davis himself helped latch Angel into his jacket.

Apparently, Angel texted Davis on Saturday before the game and asked if the owner would lock him up. All Davis said was “I’m in.”

From there, Angel was fastened to a cable and lifted to the highest point in the stadium. He was suspended 100 feet in the air, which was 50 feet higher than Harry Houdini had ever attempted.

Angel was making history before an NFL football game.

After reaching the uppermost region of Allegiant Stadium, Angel then feverishly worked free. As he spun at high velocities above the field, Angel managed to escape the jacket inside of 30 seconds.

And Criss Angel gets out of a straight jacket while dancing over the field… pic.twitter.com/ChVQsLd2Zb

The crowd went nuts and Angel dropped the jacket to the ground before being lowered quickly back to the field. The entire routine covered a frenetic, heart-racing two minutes.

Can it get any more Las Vegas?!

To make things even cooler, Angel’s stunt was performed as part of the NFL’s Crucial Catch initiative to support the American Cancer Society’s call for early detection and risk reduction across multiple types of cancer. Angel’s son was diagnosed with leukemia at 20-months-old so the performance meant even more to “The Magician of the Century.”