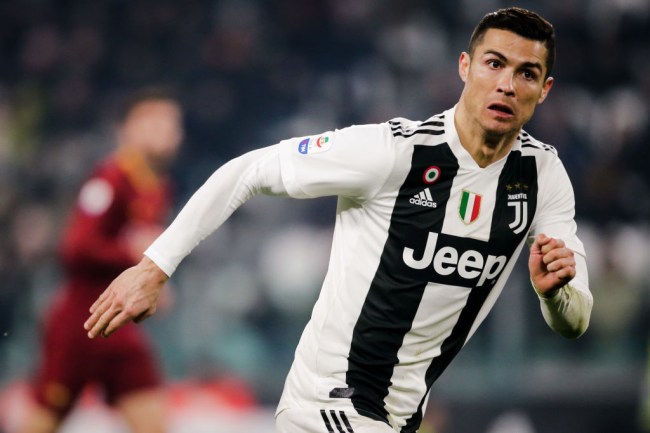 “Game’s up” for Cristiano Ronaldo, says English model Jasmine Lennard. The 33-year-old London native had a fling with Ronaldo 10 years ago and after viewing the vile allegations made against R. Kelly in the new docuseries ‘Surviving R. Kelly,‘ Lennard was motivated to expose some allegations of her own.

The model and reality TV show star vowed to help Kathryn Mayorga, the woman who accused Cristiano Ronaldo of raping her in a Vegas hotel room nine years ago, an allegation that led to an out-of-court settlement amounting to £287,000 (A$511,000). Mayorga then decided to go public with her story in order to galvanize other potential women Ronaldo victimized.

Jasmine Lennard is allegedly one of those women. On Tuesday, the model went on a Twitter rant branding Ronaldo a “psychopath” who uses his status and power to manipulate and bully women. Lennard also vowed to help Mayorga and her legal team in the case against Ronaldo.

The 33-year-old Portuguese soccer star has been accused incessantly of being a self-interested primadonna, but Lennard is deadset on exposing Ronaldo as a sociopathic control freak rather than just a guy whose using his fame a bit too recklessly. And she claims to have the evidence to prove it. Check out the Twitter thread below.

On that note and after much thought i am reaching out to Kathryn Mayorga and her legal team to offer my assistance in her rape allegation against @Cristiano please contact me. I have information that I believe will be beneficial to your case and I would like to help you.

No one has any idea what he is truly like and if they did. If they had half a clue they’d be horrified. I’m not sitting back any longer and watching him lie in the brazen arrogant entirely insensitive way that he is whilst he employs teams of PR’S and lawyers and investigators to https://t.co/bJGjgriImC

Bully and stalk and harrass and frighten and repress Kathryn Mayorga. I am going to do everything I can to help her. https://t.co/OyGZidj9pD

Hundreds of messages I have of him taking and laughing about how he psychologically bullies the shit out of his baby mother and treats her like crap. Messages about all the times he’s cheated on her. Stories of sexual conquests that mirror Mayorga’s. In depth convos where he

Acknowledges and shares about having SERIOUS mental health issues. All the LIES surrounding his children and their baby mothers. He’s a BULLY and he’s a LIAR. His whole life is a LIE. Fucking psychopath.

Told me if I dated anyone else or if I left my house he’d have me kidnapped and have my body cut up and put in a bag and thrown in a river. Yes I have proof of everything I’m saying. He’s a psychopath. https://t.co/SEXdys4JUs

Control issues doesn’t even begin to cut it. He’s a whole other level. I have a whole file of threats he’s made against me for NOTHING. Literally 1000 ways I’m going to die his temper is disgusting. He told me if I wanted to go out he would give me permission slips at one point. https://t.co/GqCl9KXPDy

Ronaldo has yet to comment publicly on the allegations.