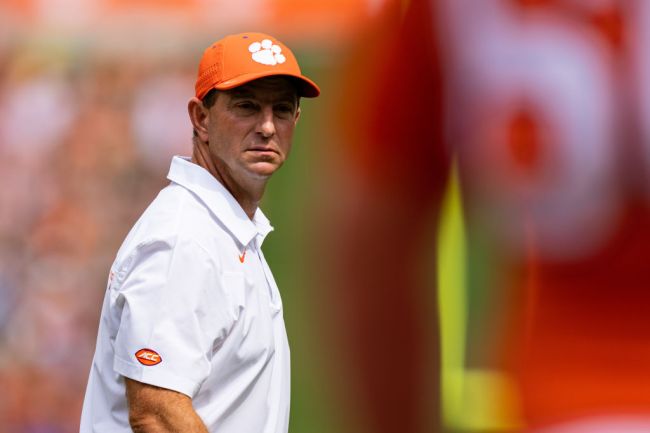 There are few people in college football who are cornier than Dabo Swinney. Credit where credit is due, because Clemson wins ballgames, but oh my god he’s unbearable.

The 51-year-old phony preacher-man manages to make every moment about himself and always wants to be the center of attention. Take the team’s pregame entrance, for example. All about Dabo:

He do be movin’ 💨 #clemson #collegefootball #sports

Well, after six consecutive College Football Playoff appearances, the Tigers are off to a 2-2 start for the first time since 2014. The entire nation is overjoyed.

Except for Dabo. Obviously, as the head coach, he is not thrilled.

However, he wants to be very clear that he is not worried and did so in the standard, over-prophesied way that only he can. Instead of dismissing the criticism with a “we’ll be fine” or a “we’re on to the next one,” he went on and on about nothing.

It could have been summed up in a sentence or two but he just would not stop.

Look at this quote:

“Just spend time with the people here. We all know where we are and how we got here and what we’ve got to do and keep moving forward. It’s not complicated. Very simple, actually. Simple things lead big things. Until we get great at the details, we won’t get it turned around.

“Nobody wants to hear it but the reality is we are two or three less mistakes from being 4-0. We wouldn’t be that much better of a team, but y’all would be asking me different questions. We lost to Georgia on a pick-6. We went on the road and lost in double overtime and, man, stunk it up in so many ways but still had a chance to win the game. It ain’t that far from the outhouse to the penthouse and it ain’t that far from the penthouse to the outhouse.”

Dabo starts off by touting how many people he talks to. He wants everybody to know that he has lots of friends and mentors.

But he also wants you to know that he’s a great man because he gives people lots of advice as well. He doesn’t have to, but he does. Because that’s just the kind of guy he is.

And then Dabo says that “it ain’t no funeral” which is such an overdramatized way of saying “the season isn’t over.” There’s simply no need.

From there, Dabo says that he doesn’t need anyone to tell him what the issue is. He is holier than thou and he knows everything.

After a lot of coach speak and nonsensical ramblings, Dabo says “nobody wants to hear it but the reality is we are two or three less mistakes from being 4-0.”

Okay great, Dabo, and I’m two or three less hamburgers from six pack abs, but that doesn’t mean I have six pack abs or that I’m anywhere close.

Instead of saying that he’s going to get things right, he goes off on this extremely unnecessary metaphor. He wants everybody to know that he’s full of great analogies and that everybody should look at him because he’s one funny guy.

Now, again, all credit to him. He’s a great recruiter, and in turn, wins football games.

That is ultimately what matters, but his whole shtick is exhausting. Please just turn it off one time, Dabo. Please.