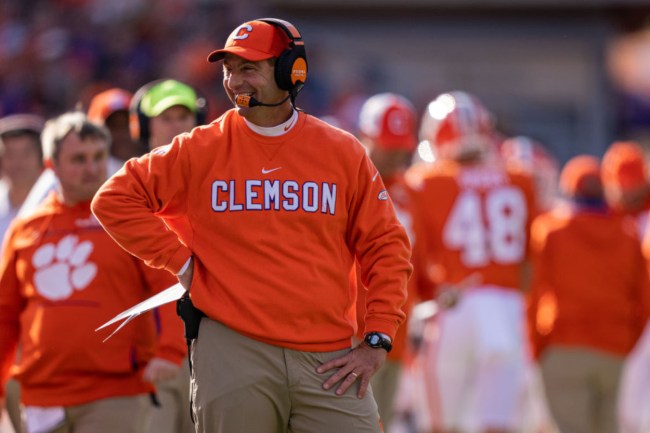 Dabo Swinney is always willing to offer up his honest opinion. On the one hand, you have to respect him for speaking his truth in a media landscape today that will pick apart practically anything he says. On the other hand, sometimes his truth and opinion are ridiculous. His latest comments about the state of college football fall in the latter camp.

Swinney and his Clemson Tigers lost defensive coordinator Brent Venables on Sunday. Venables is set to return to Oklahoma, where he previously spent 12 years, as the head coach of the Sooners. It’s felt like a long time coming for Venables to leave Clemson for a big-time head coaching job and that time has finally come, but that doesn’t mean Swinney is happy about it.

The details of Venables’ contract at Oklahoma have yet to be released, but it’s a guarantee that the Sooners offered him a massive payday to come to Norman. Venables was the highest-paid assistant in college football at Clemson.

That’s what has Swinney so upset, money.

"End of the day, we'll figure it all out as we move forward for sure. There's a lot of things in college football right now that I think we'll look back in four or five years from now and hopefully things will settle down a little bit."

Swinney Complaining About Money Is A Bit Ironic

You may agree with Swinney’s comment about money hurting the state of college football and college athletics in general, but for him to say it is very, very rich.

Swinney currently makes $8.5 million per year, that’s why his comments here are asinine.

He’s essentially whining about his assistant leaving for a fantastic head coaching opportunity and is blaming the move on money all while being one of the highest-paid coaches in the sport.

Swinney complaining about Venables and other coaches making so much money, while he too is making a truckload of money, simply makes no sense.

This is simply the state of college football right now: absurd amounts of money and ridiculous contract extensions. Instead of complaining about money and being a very wealthy man that gets to coach football for a living, maybe just relish in it, Dabo.