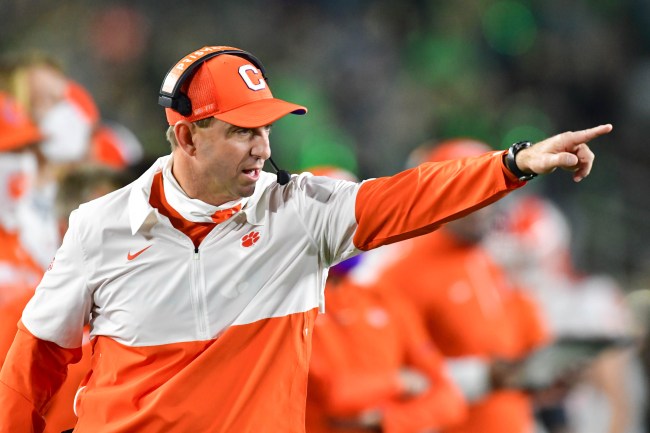 As the college football season winds down, the playoff picture is beginning to take shape. If the season were to end today, the general consensus is that Alabama is in and the winner of the ACC is in. Should that be the case, the final two spots will come down to either Notre Dame or Clemson, Ohio State, Texas A&M, an undefeated Group of Five team like Cincinnati or a Pac-12 champion Southern California. This weekend’s ACC Championship Game will be crucial in determining whether the Fighting Irish or the Tigers are to receive a bid, and both teams had their games cancelled this part weekend to let them rest before facing one another for the second time this season.

SEC commissioner Greg Sankey had a few thoughts regarding the cancellation as his conference is set to play 69 of its 70 scheduled games. He said on College Gameday that there was never even a thought about cancelling Alabama’s game at Arkansas or Florida’s home game against LSU before the Gators and Crimson Tide square off in Atlanta for the conference title this coming weekend. The latter lost on the road in Baton Rouge, virtually eliminating them from playoff contention, but Sankey touted their difficult schedule and took shots at other conferences like the Big Ten and Pac-12 prior to the game.

“Florida will have to play 8 straight weeks through our championship game,” he said. “I don’t know if you’ve noticed, but we have some conferences that aren’t even going to play 8 games in their schedule.”

Ohio State will only play six games this season if the Big Ten title game is played as planned on Saturday, and Pac-12 South champion USC has an opportunity to go undefeated in six games with a win over Washington to win the conference championship on Friday. Both teams are making their cases for reaching the four-team playoff, and if the Buckeyes are given the opportunity to compete for a national championship without playing anywhere close full season, why should the Trojans be left out with the same record?

Sankey doesn’t believe either conference should have the chance to participate and sent a direct message to the College Football Playoff selection committee, which has touted the importance of playing more games since the beginning of this unusual season.

“Playing games matters,” he said. “The Playoff selection committee has said that. We have a chance to demonstrated the excellent football in the Southeastern Conference today. I really didn’t have any pushback from our teams. They’re ready to play and have these opportunities. I think playing games matters. Candidly, you take the Texas A&M-Florida game. We added that to our schedule when we went from 8 conference games to 10. You take that game away and Florida is undefeated and Texas A&M only has the loss at Alabama and it’s a different world. So the question is — are we going to be rewarded for playing games or rewarded for not playing games?”

Clemson will have played 11 games this fall if Saturday’s conference championship rematch against Notre Dame goes off without a hitch, the same amount as Alabama. Head coach Dabo Swinney had a lot to say about Sankey’s comments and vehemently refuted the idea that the ACC cancelled last weekend’s games to make it easier for multiple conference teams to reach the College Football Playoff.

“If the ACC was trying to really protect Clemson and Notre Dame, why would we even play a game this week?” Swinney told ESPN. “I mean, if six wins can get you in the playoff, shouldn’t nine get you there? Shouldn’t 10 get you there? I would’ve loved to play this past weekend. I had no problem with that. But I didn’t make the decision. We wanted to play when we were down in Tallahassee and were about to get on a bus and go play. Things happen.”

Saturday’s championship game pits the No. 2 and No. 3 teams in the nation against one another for the second time this season. In the first, an overtime win at home in favor of the Irish, the Tigers were without star quarterback Trevor Lawrence, who was forced to sit out due to a positive COVID-19 test. Notre Dame, an independent program that joined the ACC for this football season after conferences began to get rid of non-conference games, enters undefeated and Clemson bears just the one loss. Swinney went on to tout the importance of the matchup and

No matter who wins on Saturday, both teams have surely made their cases for reaching the final four, even with one loss to one another or potentially two losses to the Irish in Swinney’s case. With bowl season around the corner, it will be interesting to see whether Sankey or Swinney gets the last laugh.