Dabo Swinney Offers Up An Honest Analogy About The Vaccine 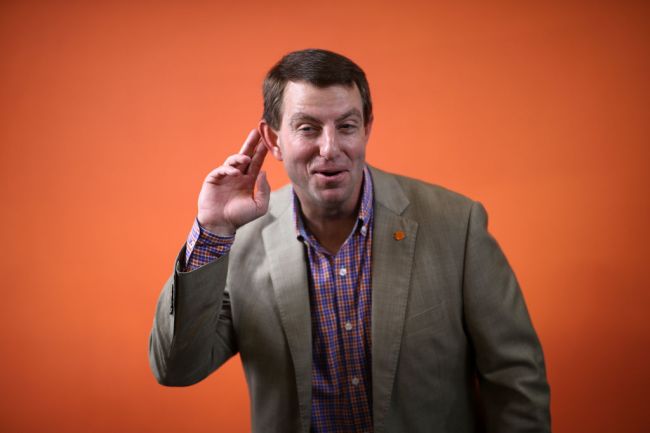 Clemson had its game against Florida State canceled last year due to the virus, which Tigers head coach Dabo Swinney was obviously upset about.

This season, thanks to the vaccine, the odds of games being postponed or canceled are much lower, which Swinney is thankful for.

Swinney spoke about his team’s vaccination status to the media on Tuesday revealing that there are very few players who have yet to be vaccinated while the entire staff has received the jab.

While speaking about his comfort level entering the season, Swinney offered up a pretty spot-on analogy comparing vaccinated folks to those who dress properly in the winter.

“It’s like knowing it’s freezing outside and you’re dressed properly. You’ve got your toboggan on, a heavy jacket, and some thermals. You can still get a cold, but you’re at least doing everything you can to protect yourself,” Swinney explained.

Dabo Swinney has a higher comfort level entering this season compared to last thanks to the vaccine: "It's like knowing it's freezing outside and you're dressed properly … you can still get a cold but at least you're doing everything you can to protect yourself." pic.twitter.com/bV8dQ0uUqU

Swinney is never one to shy away from anything in the media, even a touchy subject like vaccines. He’s always had a way of breaking things down in a relatively simple dialect, and his analogy of being vaccinated and wearing warm clothes in the winter is a great example of that.

In early August, Swinney explained that he wouldn’t be mandating the vaccine for his players.

“It’s not something we can make them do,” Swinney said. “I’d love to see us at 100 percent. Hopefully, we’ll get there. … But it’s their decision, and I respect that.”

Swinney has obviously stuck to that protocol given the fact he revealed not every player on this team is vaccinated at the moment.