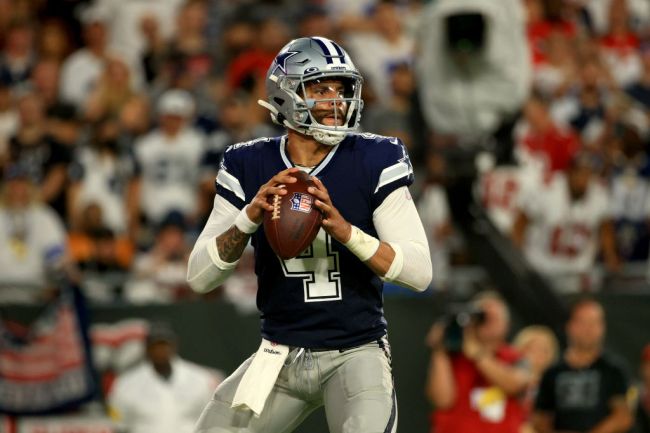 Nobody knew what to expect out of Dak Prescott in the Dallas Cowboys season opener after he missed most of last season with a brutal injury and missed the entire preseason with a shoulder injury.

The majority of fans out there likely expected him to struggle a bit, show at least a few signs of rust, but that was not the case at all. Prescott put on a show against the Bucs.

The 28-year-old completed 42-of-58 passes for 403 yards, three touchdowns, and one interception while giving Dallas a real shot at upsetting the defending Super Bowl champs on their home turf.

While Dallas ultimately lost 31-29, the Cowboys looked like a legitimate threat to compete for one of the top spots in the NFC based on Prescott’s performance.

After the game, Prescott had a message that essentially reiterated that he and the Cowboys are ready to prove any doubters wrong this year. He went as far as to say that he feels like he’s a better player now than he was before picking up the injury last year, which he was on a trajectory to have a huge season a year ago.

“I feel like I’m a better player than I was when I left the field [last year] and I told y’all that was the expectations I had for myself, and I’ll continue to try to get better game in and game out,” Prescott said, according to ESPN.

Given the uncertainties for the Cowboys heading into the season, most fans and media members didn’t like their chances of competing for an NFC East title. We haven’t seen other teams in the NFC East play yet, but if Dallas get this sort of Prescott from here on out, that division better watch out.