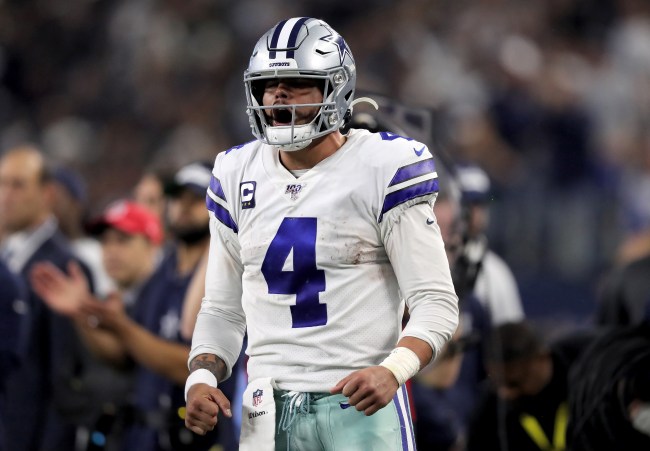 Dallas Cowboys quarterback Dak Prescott sure is sitting on a fucking gold mine, isn’t he? The former fourth-rounder in 2016 has surpassed any and every expectation after this first three seasons in the league, having reached two Pro Bowls and leading “America’s Team” back into contention, and is set to get a massive new contract by this time next year. While the franchise has yet to go further than the second round of the playoffs under Prescott, at least they’re giving themselves a shot to.

Any sports fan knows this: Finding a franchise quarterback is difficult AF — just ask my Cleveland Browns, who, since 1999, have a well-documented list of names longer than… well, it’s long. And, since the Cowboys have Dak Prescott locked into his rookie deal, the team hopes to keep him around for years to come with his next contract.

There’s just one little problem: Prescott and the Cowboys haven’t been able to reach an agreement on an extension quite yet, with the signal-caller bound to play the 2020 NFL season under the franchise tag after rumors about a potential annual salary of $35 million fell through. That doesn’t mean a deal won’t get done for Dak in the future, though, whether that’s with Dallas or elsewhere. And, regardless of which team is ready to throw lots and lots of money at Dak Prescott next season, one former NFL executive, Andrew Brandt, predicts loads of cash coming his way.

While talking to Ross Tucker on the former NFL player’s podcast, Brandt boldly predicted Prescott’s deal will be “much better than Patrick Mahomes.'” Considering the former league MVP just re-upped with the Kansas City Chiefs for a record $477 million, Brandt’s bold claim sure comes as shock.

"Mark my words … @Dak will get a much better contract than @PatrickMahomes." 😳

As Brandt states, Dak Prescott’s set to make $31 million this upcoming season on the franchise tag, and, should he be tagged again next offseason by the Cowboys, he’ll be earning $37 million — which sure is a nice increase from the “measly” $4.9 million he’s earned over his first four seasons combined since entering the NFL, per Spotrac. But will Prescott’s next contract really surpass Mahomes’ recent one? Brandt seems to think so, pointing out that, even if a long-term deal doesn’t get done, the signal-caller will still surpass Mahomes’ income over three seasons in just two years. Sheesh!

The elephant in the room is that Prescott hasn’t had near the success as Mahomes has — who won the league MVP during his first year as a starter, led the Chiefs to a Super Bowl win in his second year as a starter, and is a couple years younger than Dak. But we all know Jerry Jones is all about the brand and that damn Cowboys star, so there’s almost no doubt that he’ll overpay Dak Prescott in order to keep him around for the next decade, so long as the quarterback continues to prove his worth this upcoming season.

See, told you Dak was sitting on a fucking gold mine.