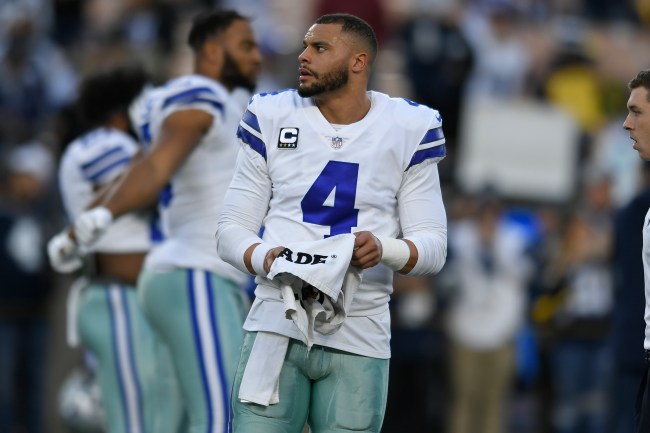 Dak Prescott is eligible for a contract extension from the Dallas Cowboys for the first time in his career this offseason, and, while there’s plenty of talk about why the team should or shouldn’t give him a boatload of cash, the quarterback is already talking about asking top dollar rather than giving the Cowboys a discount. That makes sense, obviously, because football’s a violent sport and one injury could cost you your career, right?

Well, Dak Prescott actually has another reason why he’s not willing to give Dallas a team discount — which players like Tom Brady have done in the past to free up more salary cap room in order to add other talent around him. And, I’ll tell you what, Dak’s hit the nail on the head with why he should go for the most money possible; it’s because he’s not married to one of the highest-paid supermodels on the planet, Gisele Bundchen.

Yep, that’s what Prescott referred to when asked if he’d take less money like Brady does, according to an interview with USA Today on the topic. Here’s Dak’s exact reply.

“Nobody’s wife makes as much money as his wife does either. When Tom Brady isn’t the breadwinner in the home, then that’s a great problem to have.”

“So in that case, he can do that. He can do his contract however you want to do it.”

The New York Post references that Gisele earned a healthy $10 million in 2018, and an insane $17.5 million in 2017, so, yeah, Brady isn’t exactly worried about what life after football looks like. Add in his own 2018 base salary of $15 million — which is nothing to pout at, even if it isn’t among the highest-paid players at his position — and Tom Brady and Gisele have all but set up their family’s future for generations.

On the other hand, Dak Prescott earned “just” over $725,000 in 2018 because he was playing on a rookie deal that saw him get selected in the fourth-round. So, no matter what he gets paid next, it’s going to be millions more than that, so he’s probably happy with the major pay increase.

As for those who don’t think he deserves such money, Dak Prescott doesn’t care too much about your opinion, because it’s helped him reach this stage in his NFL career, so go ahead and keep on talkin’ bad about him.

“People are going to question and I want them to,” he said. “I don’t care. I am here where I am today because of the people always saying what I couldn’t or could do.”

“It’s almost comical sometimes. If I hear it or allow myself to get involved in the talk, sometimes it’s comical. But I just keep going out there and just doing what I know I can do best.”

Hey, dude can ball, and he’s going to make sure the Cowboys pay him handsomely for doing so over the past three seasons.