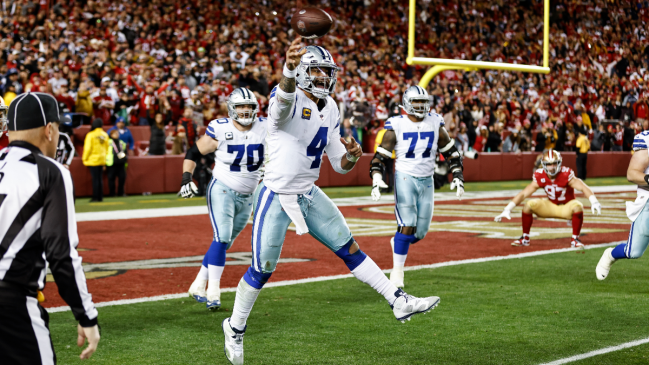 The Dallas Cowboys were, yet again, bounced from NFL playoffs in embarrassing fashion on Sunday evening.

Cowboys quarterback Dak Prescott had, statistically speaking, the worst playoff game of his career and Dallas fell to the San Francisco 49ers, 19-12.

Prescott finished the contest 23-of-37 for 206 yards, one touchdown and two interceptions. He was probably lucky to not have at least one more interception and missed on multiple big-play attempts.

The performance led some Cowboys fans to call for the team to trade its start quarterback. While others turned to much more dramatic and dangerous options.

Ultimately, Prescott was not good enough when Dallas needed him to be. But that’s not news to seventh-year quarterback, who talked about his performance at length following the game.

The narrative coming out of the contest was that Prescott came up small in a playoff game, which is typical. But the numbers don’t particularly back that up.

Even so, Prescott was clearly not good enough against the Niners, and even he knew it.

“If I had the answers, then we would’ve won tonight. Too early. Too soon,” Prescott said. “And I promise you we will, though. In my time playing on this team, for this organization, we will. Yeah, it sucks that it’s 365 days away to get back to this position, but we’ve got to take it day by day, step by step, and that’s what I’ll do. I know that’s who I am. I’ll respond the right way. As I said, when we get this team aligned, the guys that we get back, coaches, we’ll do what’s necessary to be right back here and win the next time.” – via ESPN

As for the interceptions specifically, he was very quick to take the blame.

“Very frustrating,” he said. “Something I’ve got to get an offseason, take a look at all of them. As I said before, they all have their own story. The two tonight? Unacceptable. Can’t put the ball in jeopardy like that. Whether they’re tipped up in tight throws or whether I’m late on a stop route, just can’t happen. The number that added to is ridiculous. I can promise that the number will never be this again.

The poor showing against San Francisco caps what has been the worst statistically season of his career. He led the NFL with a career-high 15 interceptions in the regular season and struggled to create big plays. That’ll need to change if Dallas hopes for a different ending anytime soon.