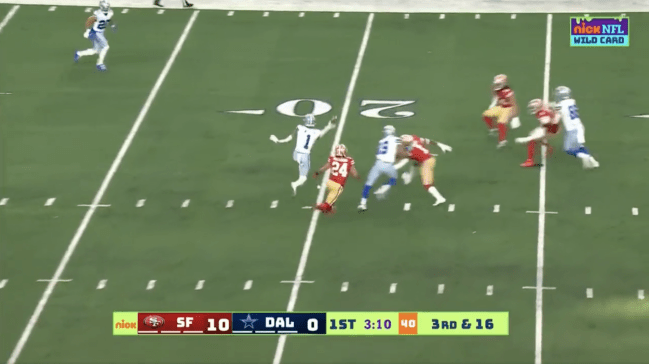 The first quarter of Sunday’s NFC Wild Card game did not go well for the Cowboys. After falling behind 10-0 to San Francisco early, the Dallas offense found itself backed up in its own half.

On 3rd-and-16, offensive coordinator Kellen Moore may have dialed up a little bit of trickery. It is unclear if it was intentional, because it was such an epic fail.

Quarterback Dak Prescott took the snap and quickly threw a laser across the middle to wide receiver Cedrick Wilson. With four 49ers defenders closing in before the first down marker, Wilson tried to get creative.

The 26-year-old out of Boise State looked near the sideline and saw running back Tony Pollard with room to run. In turn, Wilson tried to lateral the ball to his back in the flat for him to try and get the first down.

Instead, Wilson chucked it so far out of bounds that it is impossible not to laugh.

To circle back, it is not clear as to whether this play was designed or not. Pollard was the check-down option out of the backfield and Wilson was coming across the middle. Things lined up perfectly for the trickery and it looked like Pollard may have had some sense of what was going on.

However, the ball was so poorly thrown and chucked so far out of the field of play, that it may have been something that Wilson just chose to try in the thrill of the moment. Either way, it was a flop. A major, hilarious flop.