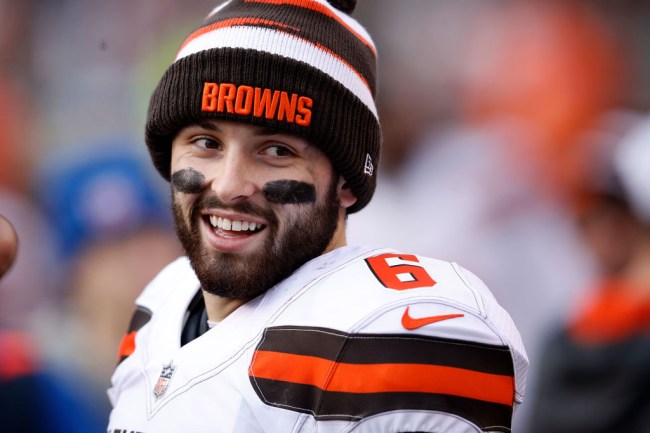 After the Browns beat up on the Bengals Sunday, Bad Boy Baker Mayfield made headlines by taking a shot at his former coach (and now Bengals assistant coach) after engaging in a chilly, awkward reunion at mid-field. Mayfield was upset Hue Jackson defected to another AFC North team so soon after being fired by the Cleveland Browns last month.

Baker vented after the game:

Left Cleveland goes to Cincinatti, I don’t know someone that was in our locker room that was asking us to play for him then goes to a different team that plays us twice a year everyone can have their spin on it, that’s how I feel.

ESPN First Take analyst Damien Woody stirred the pot when he declared on national television that Baker has to “grow up” because “things happen in pro football.” The two-time Super Bowl champion then essentially called Baker a hypocrite for blasting Jackson after he bailed on Texas Tech to join in-conference rival Oklahoma. Baker disagreed with Damien’s assessment, and even dropped a condescending “buddy” at the end to really twist the knife.

Damien Woody refuses to succumb to Baker’s intimidation tactics and posted a video standing his ground to Twitter last night.

To Baker and all his fanboys out there, listen up. I’m going to make this real quick and simple for all ya’ll. Hue Jackson was fired. K, get it? Unemployed. Fired. No job. If that man wants to go work for the Cincinnati Bengals, who the hell are you to try to dictate where that man should work? Ya’ll won the game yesterday, you won the game. So why you concerned about Hue Jackson and where Hue Jackson is working at? You feel me? That’s why I said: Grow Up.

I’m as big a Baker fanboy as any, but how are people not taking Damien’s side on this??? What would make Baker happy, if Hue sits at home and plays housewife while listening to Bon Iver and crying into a pint of Ben & Jerry’s? Fuck that noise. Like he’s supposed to have some lingering feelings for a team that was shit long before him and sent him packing mid-season. That’s like calling up your girlfriend you recently broke up with and telling her she has to wait to hook up with someone else and you have to approve of the dude. No, no. That’s not how post-breakup sex works, bro. It’s a race to the finish.

Here is an opposing point of view:

To Damien Woody and all his fanboys. pic.twitter.com/ch9tsVOZ9O

Baker and the Browns play Hue and the Bengals again on 12/23. I’ll grab my popcorn.