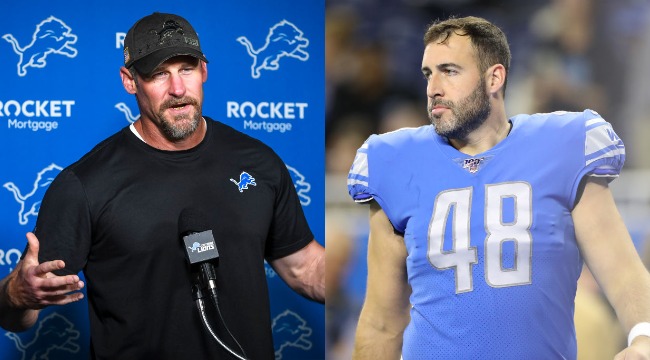 Remember that time Bill Belichick shipped off All-Pro Jamie Collins to the winless Browns in the middle of the season and went on to win a Super Bowl without him? Or the 1990s Chicago Bulls paying Scottie Pippen in Cracker Barrel gift cards?

We can bang on the “sports is a business” drum until the snare breaks, and first-year Lions head coach Dan Campbell has just offered another data point.

“No doubt. There’s no way to sugarcoat that,” Campbell said. “I’m an a–hole. So that’s about the best way to put it, and I hate it. There was no way around it, really. Yeah, you can say there is, but ultimately that falls on me. It’s my fault. Don’s a helluva dude. It sucks, but it is what it is.”

Muhlbach was not only a three-time team captain, he was also one of Campbell’s teammates during his ex-head coach’s tenure as a player with the Lions from 2006 to 2008. His 17-year, 260 game career is second in franchise history behind only Jason Hanson.

Since arriving in Detroit in 2004, LS Don Muhlbach carved out a legendary career with the @Lions.

A team captain and leader off the field, Muhlbach leaves Detroit as one of the most accomplished players in both team and @NFL history.

Read more about his legacy below: pic.twitter.com/Jf6bKV13d5

Campbell ultimately revealed the toll it takes on terminating a player’s dream, especially one who’s been in a Lions uniform since Tom Brady was still rocking the middle part.

“That’s hard. For me, I can take things personal at times, if I’m being honest with you. … It digs on me a little bit, and I hate it because I was in that locker room and I played and I know when you see these guys who literally do give everything they have and you have to let them go or you got to make these decisions, it’s tough. It’s real tough because I appreciate them, but it is what it is.”

A live video of Dan Campbell celebrating Don Muhlbach birthday with Don Muhl. He shares some beer with him, they hug it out… and then… 😩 pic.twitter.com/YPkmQpwiVd