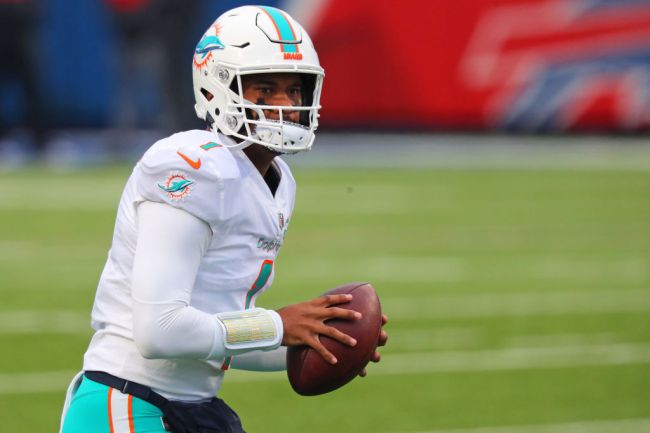 Tua Tagovailoa may have appeared in 10 games for the Miami Dolphins during his rookie campaign a season ago, but with Ryan Fitzpatrick in the QB room, it never felt like the team was officially his.

For the majority of this offseason, Tagovailoa’s name has been among trade rumors, particularly those involving a potential swap for Deshaun Watson, and as the speculation has quietly softened Dan Marino has seemingly put the rumors and any doubt about Tua’s future in Miami to bed.

It’s been interesting to see the script on Tua change over the last handful of weeks. He’s gone from being a question mark in Miami to receiving praise from his wide receivers about changing his mechanics and now he’s gotten a tip of the cap from the greatest quarterback in Dolphins history.

While Marino and the rest of the NFL world realize that Tua will need to take a rather sizable step in year two to really take the Dolphins to that next level, Marino has all the confidence that Tagovailoa will do exactly that.

“He’s been great. He’s been awesome. He has all the talent in the world. Now it’s just about him developing the relationship with the other players,” Marino told ESPN about Tagovailoa. “It’s been tough because he didn’t have OTAs last year, a lot of the summer camp or the chance to play in exhibition games. All those things delay you somewhat. I’ll tell you, he works his butt off. I’m really excited about him, his future and our future as a team.”

“He wants to be really good. And in time, he’s going to get there because that’s what type of kid he is.”

It’s no surprise to hear Marino, who is an advisor for the Dolphins, speak highly of Tua. He realizes that Miami is officially handing the keys over to him so the only real thing Marino can do is instill confidence in him.

Not too long ago we didn’t really know if Tua Time in Miami would actually be a thing for the upcoming season, but it’s clear given Marino’s comments that the Dolphins are officially going all-in with Tagovailoa and their immediate future involves him under center.