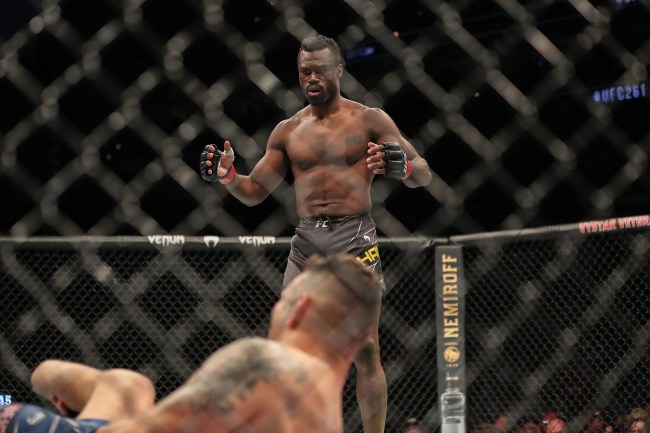 Former UFC middleweight champion Chris Weidman suffered one of the most painful-looking injuries you’ll see just 17 seconds into his match with Uriah Hall at UFC 261, snapping his right leg below the knee after Hall checked his very first leg kick.

The injury automatically gifted Hall (17-9) a W over Weidman (15-6) via TKO, but Hall couldn’t help but empathize for the man who handed him his first loss back in 2010.

“I’ve got nothing but respect for Chris Weidman,” Hall said. “He’s truly one of the best. It’s a crazy story, that he was the first man I fought that defeated me [in 2010], that introduced me to fear. I didn’t know what fear was. Then we went different paths. He was the first person to defeat Anderson [in the UFC], and I was the last. It’s crazy how we ended up here again.

“I wanted to put on a great performance, but man, I feel so bad. I hope he’s OK. I wish his family well.”

UFC President Dana White was a bit more dispassionate in his response, choosing to highlight the fact that Hall is the first fighter to win in the octagon without a single strike thrown.

The first fighter in @ufc history to win without a single strike thrown #UFC261 pic.twitter.com/zxyu5XhYu3

Even Roger Goodell got some good press from the incident. Miracles do happen.

Imagine Roger Goodell or Adam Silver posting something like this after one of their guys snaps his leg into pieces. Just as dumb as it gets.

this isn’t something to celebrate.. wtf pic.twitter.com/ZiTHdsv6qC

What??? How disrespectful is that? https://t.co/a8MjX1NJkX

This is why Vince McMahon is better than you.

So fucked up. U make Weidman into a statistic before wishing him well. Classless

Cuz he don’t give a shit lol

Dana, if you’re curious, Chris’s surgery went well. No word yet from the docs on where the surgery ranks in the history of surgeries, but will make sure to update when that info becomes available.