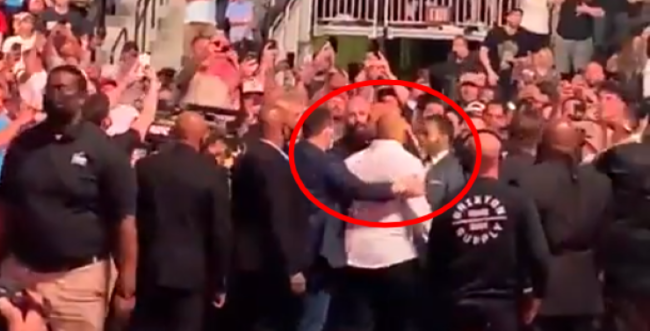 Daniel Cormier wants all the smoke with Jake Paul.

Earlier this week Paul went on his brother Logan Paul’s podcast and talked a massive amount of trash to the former two-division UFC champion.

“Daniel Cormier (was saying) that’s my boy Ben, he’s gonna beat Jake, he pushed him in the face so he’s gonna win now, chirp, chirp, chirp,” “I knock him out and he’s on Twitter, ‘Ben, are you serious, bro, you went down like that. Ben are you kidding me, I can’t believe you did that to the MMA community.’ Shut the f**k up b***h. I’ll beat the f**k out of your fat ass too, just like Stipe did, Cleveland sh*t. I’ll beat the f**k out of Daniel Cormier.”

On Saturday night Paul made an appearance at UFC 261 and fans began chanting “fuck Jake Paul.” After the chant, Cormier, who was working the event as an announcer, confronted Paul.

JAKE PAUL AND DC ABOUT TO DUKE IT OUT WTF pic.twitter.com/vliMaO3AiY

DC and Jake Paul having some words with each other #UFC261 pic.twitter.com/3DaiffkaDM

According to Cormier, he went to Paul and told him to stop playing with him or he was going to smack him in the face.

I swear to God, I saw Jake Paul and I went to him and pointed at him and told him don’t play with me cause I’ll smack him in the face