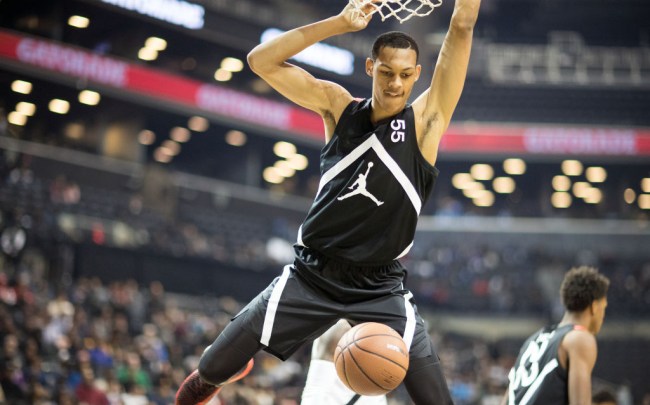 As it currently stands, high school basketball players have a few options if they want to take their talents to the next level.

The most common move is to become an indentured servant to the NCAA and use your skills to help them rake in a billion dollars a year on the backs of unpaid talent.

The second is to follow in the path of LiAngelo and LaMelo Ball and head overseas to wear jerseys covered in ads while playing games in unpronounceable cities across Europe— or, if you’re really desperate, join the JBA and risk not getting paid an already low salary.

The third option is to join the NBA’s G League, which also underpaid players until announcing elite-level athletes would be eligible to earn upwards of $125,000 starting this summer (news a number of WNBA players weren’t exactly thrilled to hear).

Despite receiving a scholarship offer from Syracuse and being given a chance to play in the NBA’s developmental league, prospect Darius Bazley decided none of those options were right for him.

However, based on the $1 million internship he just landed, it looks like he made a pretty good call.

According to The New York Times, Bazley recently inked a deal with New Balance, who apparently have a fair amount of cash on hand since deciding to pivot from selling shoes to dads and setting their sights on hypebeasts.

As part of the agreement, Bazley will spend the college basketball season interning at New Balance as part of a longer-term contract that could pay him up to $14 million if he manages to make it to the NBA (which is by no means a foregone conclusion at this point):

“The internship, to be precise, is folded into a handsome shoe contract Bazley, 18, has landed with New Balance on the lure of his pro potential.

According to [his agent], Bazley’s multiyear deal will pay him $1 million ‘no matter what happens’ with his NBA career—and can pay up to $14 million if he reaches all performance incentives.”

As someone who had to convince my boss at my first internship to double my salary to a whopping $200 per week, I’m not jealous of Bazley at all.