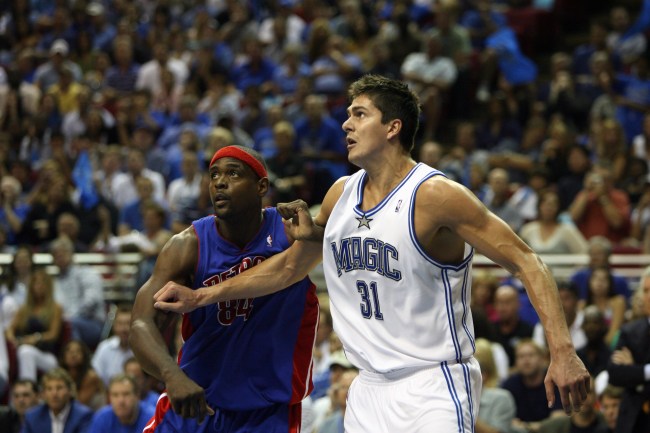 Darko Milicic was the second overall pick by the Detroit Pistons in the 2003 NBA draft, largely considered to be one of the most-stacked drafts in the history of the game. The 7-foot Serbian was chosen only after LeBron James and before guys like Dwyane Wade, Carmelo Anthony, and Chris Bosh.

Milicic secured an NBA Championship ring in Detroit in 2004 and bounced around the five other NBA teams over nearly a decade before Milicic asked that the Celtics release him to deal with personal matters after only spending one month with the team and playing only five minutes.

Now, after seven years removed from basketball and a stint as a kickboxer, the 34-year-old participated in his first official game for Serbian team from Novi Sad “I Came To Play”.

DARKO MILICIC IS BACK!

LeBron, Darko, Delfino and Barbosa are the only four still active 2003 first round picks pic.twitter.com/fhdXXGxV3h

The 2nd pick of the 2003 NBA draft scored 2 points and evidently received an over-the-pants-handjob in a win against Futog before he suffered a minor shoulder injury.

Darko’s return was nothing short of a gift to NBA Twitter.

After 7 years, Darko Miličić stepped on the basketball court again – for the team "KK I Came To Play" against Futoga in Serbia's 4th division.

He scored two points, then left the court due to shoulder injury. pic.twitter.com/zV3l1iDlKn

With the second pick in the 2003 nba draft, the Detroit Pistons select… Darko Milicic https://t.co/tPbMxbB3pL

Even DARKO MILICIC has a job and not Melo https://t.co/Yu60tlJnHG