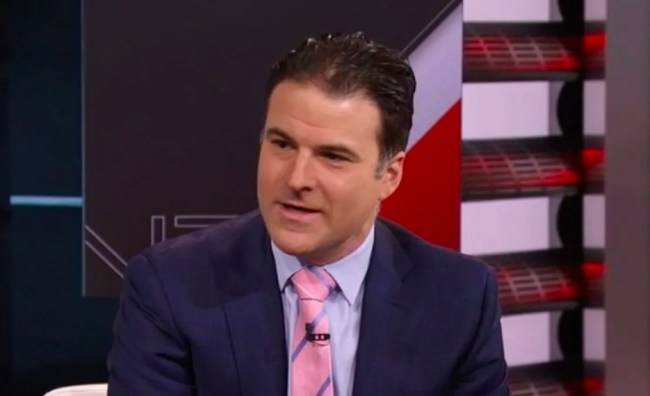 Philosophers have spent millennia pondering the meaning of life and trying to figure out what the point of this strange thing called “existence” truly is, and despite the best efforts of these brilliant minds, nobody has managed to figure out what it’s all about.

However, Darren Rovell is one of the few people on the planet who doesn’t really have to fret about what his purpose on Earth is, as it’s pretty clear he’s only alive for one reason: to get dunked on.

It’s honestly hard to keep track of just how many people have shoved Rovell into a metaphorical (and perhaps literal) locker over the years, whether we’re talking about Tom Brady, the Twitter account of the Tennessee Titans, or basic fans of human decency.

Of course, there’s evidence that Rovell is fully aware of what a squid he is, as I can’t imagine he willingly agreed to run his infamous 20-yard dash without knowing the amount of shit that would be lobbed in his general direction once it was released to the viewing public.

However, if you need more proof that Rovell is a veritable herb garden, you don’t need to look any further than Brody Logan, a reporter who recently shared a story about the time he almost fell victim to the Twitter addict’s wrath.

According to Awful Announcing, Logan decided to recount the time Rovell got his tighty-whities in a bundle and tried to get him banned from covering the Washington Nationals over…a picture of this sandwich?

Here’s the full breakdown of what happened.

So I thanked him, took the picture, and tweeted it out with a description of this new DMV food offering. Tweet took off, got on blogs, whatever.

Later that night I get a message from my boss "we have an issue with the Nationals you need to see me when you get in."

I had to write an apology to the Nationals explaining that I was unaware it was possible to have a hot dog exclusive, because if I didn't, I could have lost my credentials for the season. Because R*vell complained to the team I tweeted a picture sent to me by a third party.

The worst part is I had to have a meeting over this stupid thing, and that my boss had to take time out of his day to deal with it, and that the team couldn't just say "yeah yeah, no problem, we'll talk to him" then do nothing and let it slide. But no, it became a work ordeal.

I’d say this is Peak Rovell but I’m sure it’s only a matter of time until he tops himself.