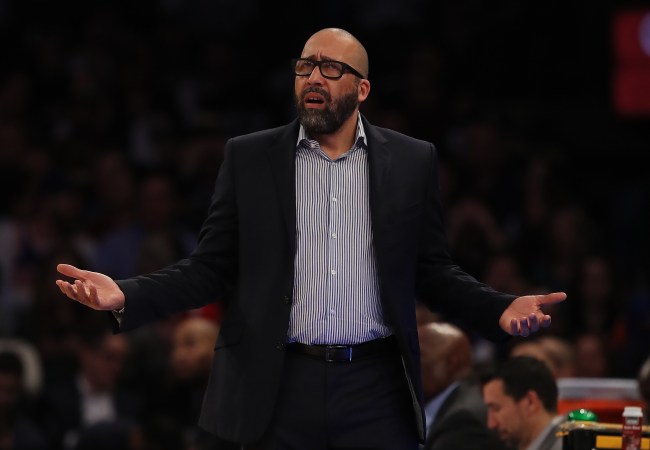 David Fizdale’s tenure as the head coach of the New York Knicks was, in a word, pathetic. Lasting just 1.5 years with the dysfunctional franchise, Fizdale was canned a few months ago after compiling an overall record of just 21-83, which included an embarrassing 4-18 start to this season before getting the axe. The state of Knickerbocker basketball truly is sad.

Considering Fizdale’s still technically on the Knicks’ payroll — even though he’s also a free agent — there are moments when he has to watch what he says. I mean, the last thing the dude wants to do is go around town and bash the entire franchise for millions to see, which could trigger a breach of contract. In short, Fizdale needs to be quiet and tread lightly when the Knicks are topic of discussion.

There’s no better example of that than on ESPN’s The Jump the other day, when David Fizdale awkwardly sat on set smiling like a puppet while hosts Rachel Nichols and Brian Windhorst discussed the Knicks. Instead of offering up insight or criticizing his former team, because he’s still being paid by the team, the former head coach was more vanilla than a Bill Belichick postgame press conference. Take a look below at the uncomfortable live TV moment.

Did David Fizdale look ridiculous during the entire segment? Sure. But it’s called making a business decision, so if someone’s going to pay me $17 million to do something similar, I’m all for it. All Fizdale really added was insight that read like a prepared statement:

Hey, sometimes you’ve got to play the game, and for $17 million, it’s worth looking like a clueless puppet on live TV in order to get that big pay day.