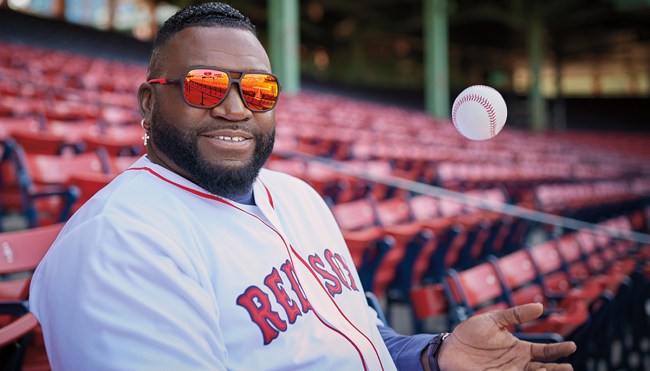 On January 22, 2003, the Red Sox decided to take a chance on David Ortiz, a largely unheralded first baseman who signed a $1.25 million contract with the team around a month after he was released by the Twins—a deal that came with no guarantee he’d be a member of Boston’s roster on Opening Day.

It’s safe to say that move worked out pretty well for all of the parties involved. On October 10, 2016, Ortiz played his final MLB game following 13 seasons with the Red Sox where he managed to establish himself as one of the most beloved players in the history of the franchise while racking up a résumé that included three World Series championships, 10 All-Star Game appearances, and seven Silver Slugger Awards.

That lengthy list of achievements culminated in the ultimate honor earlier this year when Ortiz became the only player on the most recent ballot to be voted into the Baseball Hall of Fame (with no help from Dan Shaughnessy, the insufferable Boston media relic who the slugger accurately dubbed an “a—hole” for neglecting to endorse his enshrinement).

Ortiz will officially be inducted into Cooperstown on July 24, and I was thrilled to get the chance to sit down and chat with him ahead of the ceremony courtesy of Zenni, which recently teamed up with him for a new line of eyewear that he played a key role in curating. 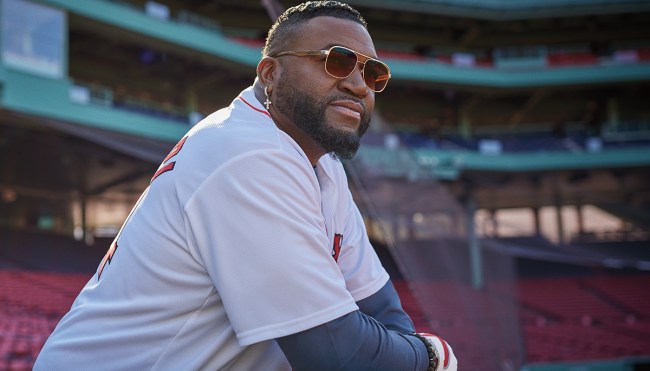 In addition to shedding some light on that collab, the man known as “Big Papi” reflected on the heated rivalry between the Red Sox and the Yankees that reached a boiling point following his arrival in Boston, shared why he thinks he’d beat Manny Ramirez in a home run derby in their respective primes, and explained why his 17-year-old son D’Angelo is already in a prime position to follow in the footsteps of his famous dad.

BroBible: David, it’s an honor to get to chat with you. Thanks for taking the time to speak with me. I know you’ve been working with Zenni for a while now. Can you give me the lowdown on your latest project?

David Ortiz; The good thing about Zenni is that they give me the opportunity to be myself.  When it comes down to putting these glasses together, it was all about me being me.

I’m a glasses guy, I love wearing glasses of all time. They gave me a bunch of different choices and I loved them. They also gave me the opportunity to have them tie into my native Dominican Republic

I think people gonna love this. You can go from being a pimp like me to being philanthropic. They give you all the choices.

I was a diehard Red Sox fan growing up. Like so many people in New England, I had this genuine, passionate, hatred for everyone on the Yankees and anyone associated with them. I’m curious to get your perspective on the rivalry as a member of the team who arrived at its peak and had a front-row seat to some of its most heated moments

Did you or any other players share that feeling or was there more of a mutual respect as opposed to a mutual disrespect between everyone on both teams?

I have a really good relationship with pretty much every single Yankee player that I competed against.

You look at guys like Derek Jeter, Bernie Williams, Mariano Rivera, and then you come to my side and you look at guys like me, Manny Ramirez, Trot Nixon, Jason Varitek. Everybody was basically sort of a competitor. I think that sometimes the heat of the competition and the history behind it is what led to those arguments and those fights.

I wasn’t a big fan of the fights on the field. I don’t want people that come to watch us play to go home getting the wrong message.

It got to the point where people were complaining about us not fighting anymore. I was like, “Look, we’re not here to fight, man. We’re here to compete against each other. We’re here to show who was the best but then.” I got to see more fights between fans in the stand than on the field. It was like a tradition between the two teams.

I will say I’m one of the only players. In fact, I don’t wanna say that I’m the only players who have Yankees fans coming up to me all the time and saying something like, “Hey, David, I’m a Yankee fan, but I respect you and the way you handle your business.”

I get that all the time. If I got a dollar for every time I hear that I probably would have more money at that than what I made in baseball. Really and the only fans that come and say that to me are the Yankee fans. Not Dodgers fan, not Minnesota fans. No other fans but the Yankee fans.

I think it was because I wasn’t down with thinking about the fighting and all the crap. I was just playing the game the right way. I have so much respect for Mariano, Derek, A-Rod, and all those guys.

They knew they were my enemy, but in a respectful way. You know what I’m saying? I will whoop your ass and then take you up for dinner afterward.

You sort of played in a couple of different eras of baseball and saw the game change in a number of ways over the course of your career. I’m curious to get your thoughts on its decline in popularity and if there are any factors you think have played a role or that you would change if you were in charge?

One of the biggest things was the shift started increasing during my time in the league. I think it was really because of me and Barry Bonds. I don’t remember seeing that before our time. It got to the point where you had four outfielders when I was hitting against Tampa.

The game has changed, but I thought it was great that the MLB decided to change it for a number of reasons.

Number one, you’re still looking for a guy to get 3,000 hits. That is not going to happen with the shift. You’re never gonna see a guy getting 3,000 hits again because it changed the nature of the game.

You might have a right-handed guy hitting a ball to second base that’s a hit that was supposed to be an out because you’ve got everyone shifting to left, but you’re not going to see much of it because that’s not the guy’s nature. The guy’s nature is probably pulling the ball, but now you have three guys playing in that position.

I don’t think it’s fun. I like to see them playing normally. Do what you have to do to get a guy out as a pitcher, but they have to do something about the shift.

I saw a clip of your son D’Angelo driving in Manny Ramirez Jr. during a game. What has it been like to watch him develop as a player and how would you say he compares to where you were when you were his age?

I think he’s more advanced than me because he’s more mature. He grew up in a big-league clubhouse. He knows what it takes.

When I was his age I had no clue about what was coming. All I wanted to do is have fun and play baseball. I also had the mindset that I was my family’s way out. He didn’t have to leave them behind or deal with all that pressure.

I guess he does have more pressure than I did because of his dad because everyone expects him to fill my shoes, which isn’t fair to him. I’m never going to ask him to be like me. The most important thing about him is that he’s very responsible with how he handles his business and baseball.

I don’t push him at all. He’s the one that wants it. I’m his advisor. We work on his mechanic and the things that I know, but he has so much dedication. I’m very proud. Even if things don’t go the way he wants it or I want it—you always want the best for your kids—I’m always gonna be proud of him. For a guy his age and being my son, he never asked for anything. Everything he wants is just related to baseball. He’s a very humble kid.

He’s playing with guys older than him and you can see how mature he is and how and the type of approach he’s trying to put together.

To bring things back to Manny Ramirez, who do you think would win in a home run derby if the two of you faced off in your prime?

Me and Manny in a home run derby? I would beat him. Let me tell you why: Manny doesn’t even really like hitting homers.

In my case, I used to love hitting the ball far. We are two different types of hitters. That’s why Manny has a lifetime batting average of .312. Manny was all about using the whole field,  which was something that I learned from him and it made me a better hitter throughout my career—especially as I started getting older.

I learned that from him because Manny was the master as a hitter. I think Manny was the best right-handed hitter I’ve ever seen. You look at hitters and the types of holes that they have in their swing and I don’t think Manny had any. His swing was so beautiful.

I cannot tell you a single pitch that worried Manny when he was up. Fastball, slider, changeup; Manny didn’t care. he was that type of hitter. He would also never really swing out of the strike zone. His discipline as a hitter was on another level.

Thanks again, Papi. Congratulations on Cooperstown.

Thank you very much, man. Have a nice day.