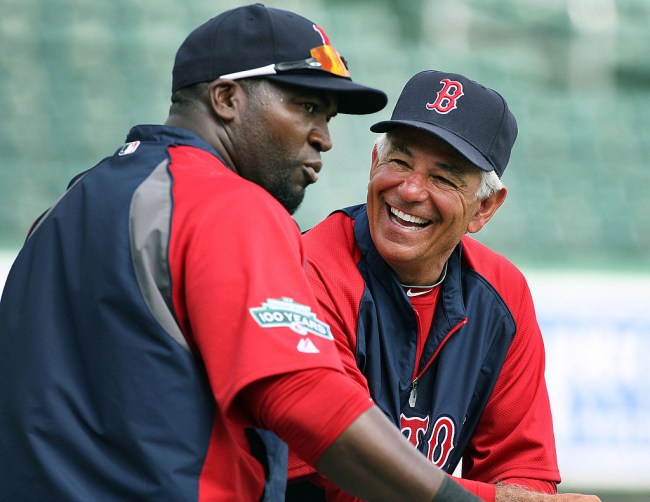 The Boston Red Sox 2012 season went about as well as a Lena Dunham-run bachelor party. The Sox finished with 69 losses (nice), dead last in the AL East for the first time in two decades, and the players’ collective relationship with their new high-profile manager Bobby Valentine was as strong as a shot of O’Douls.

In his quest to make literally everyone in Boston hate him, after the season, Valentine accused Boston icon David Ortiz of quitting on the team. He had the gall to say this to Papi after battled back from a foot injury, only to come back to a sinking ship too soon, and re-injuring himself. And if that wasn’t enough, Valentine texted Ortiz after his comments and tried to blame the media on overblowing the story EVEN THOUGH HE WAS QUOTED AS SAYING PAPI QUIT ON THE TEAM. Dude’s a fucking asshole, and in his new memoir Papi: My Story, Ortiz details the gaping disconnect between Bobby and the team, and he does not mince words.

The except below is an excerpt taken from Papi’s book and transcribed on SI.com. It’s long, but if you’re taking a dump or riding the subway, it’s well worth the read.

I had never met Bobby Valentine before 2011. I’d heard of him, seen him on TV and remembered that he was the guy who’d put on a fake mustache to avoid being recognized and thrown out of a game. But I didn’t know the man, so that left me with an interesting decision at the end of the year: Should I listen to my friends, or pretend that I’d never heard a word they said?

Everyone I knew was unimpressed with Valentine, the new manager of the Red Sox. He was hired in late November 2011, and the negative reaction from my baseball friends was instant. There were the sarcastic “good luck” messages. There were ominous warnings to get ready. Some even suggested that, at 36 years old, I probably wanted to retire rather than play for someone like him.

I’m a person who has been able to get along with a range of personalities, pretty much everybody, so I tried to block out all the information I had. I tried not to think about the fact that the Red Sox never asked my opinion on players they were thinking about signing or managers they wanted to hire. I found out on the news, just like everyone else, that Valentine was our new manager. I did some research and learned that there was basically one person in the organization, team president Larry Lucchino, who really wanted to hire Valentine. That was it. One person. Still, I had to perform regardless of who was managing. How bad could Bobby V really be?

The drama began almost immediately in spring training. I remember fighting the thought, very early, We’re going to have an absolutely terrible year.

It was all about him in the spring. It was as if he wanted to prove how smart he was by running us through all these drills he’d used while managing in Japan, drills we had never done before. Bobby was in his own bubble, and I just wanted to get him out of it and tell him, “F— you.”

He asked for a lot of changes, including some that were completely unnecessary. One of the more ridiculous ones was having players hit grounders to each other. I thought that was funny, especially for me. The Red Sox weren’t paying me to hit grounders; I was there to hit balls to the moon.

The problem was not that his drills were new. The bigger issue was how he expected players who had been in the big leagues a long time to immediately do things his way without any missteps. There had been a lot of conversations about our team the year before and how our lack of accountability led to our September collapse. Maybe Bobby was told to come in and boss around full-grown men. Maybe the Red Sox wanted to hire a daddy, not a manager.

One day we were doing his drills and the s— hit the fan. We were hitting pop-ups, and Bobby had said that he didn’t want infielders to say, “I’ve got it, I’ve got it. . . .” He thought that was an unreliable way of calling off a teammate because, in a noisy stadium, the player who’s being called off might not hear his teammate taking control. Well, all players have habits. And in American baseball, most infielders taking the play say, “I got it.”

So when our shortstop, Mike Aviles, got under a ball, he instinctively said, “I got it.” Bobby snapped. It was unlike anything I had ever seen in the majors. He went off on Aviles, cussing and verbally tearing him down in front of everyone. If it had been me, I would have gone up to him, right in front of the fans and dropped a punch.

After that workout, I talked with Dustin Pedroia and Adrián González. We decided to meet with Bobby in his office and attempt to tell him how he was being perceived. It was a waste of time. We tried reasoning with him, and it was like communicating with a wall. All he did was roll his eyes and look everywhere but at us. It could not have been more obvious that he didn’t care what we had to say. We left his office shaking our heads.

I was competitive enough to think that we could win a bunch of games despite Bobby’s ego. It didn’t take long for me to realize I’d been too optimistic. And when I say not long, I mean the first series of the season. We opened in Detroit and were swept by the Tigers. It was impossible to ignore the comments from my teammates about Bobby’s managing, how he made decisions that didn’t make sense and how generally clueless and distant he was. The next stop on our trip was Toronto. On the flight there, I experienced a first in my career.

Bobby’s seat was in the middle of the plane, and the players were in the back. That day I was near the front of our section. I remember looking up and seeing a line of my teammates walking toward me. They were pissed. They said, “We want that mother—— fired before the airplane lands.”

Bobby Valentine is currently the athletic director at Sacred Heart University and where he should be: out of the limelight.