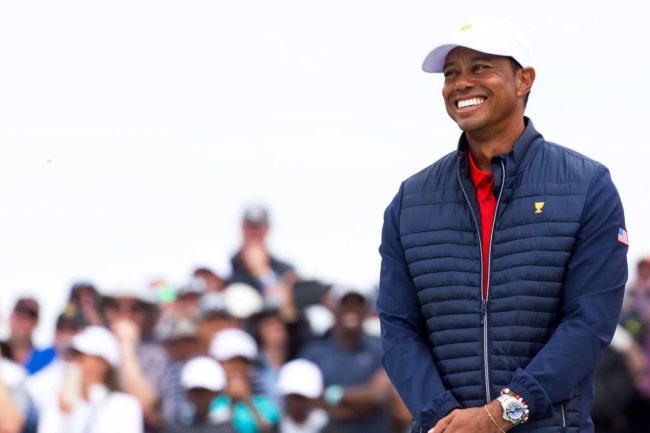 Three weeks ago nobody knew that Tiger Woods playing in the 2022 Masters was a realistic possibility. Fast-forward to today, and we’re just a few days removed from him not only playing in the Masters, but making the cut.

We don’t know what Woods’ playing future holds, although he’s said he has plans to play in this year’s Open at St. Andrews. Casting doubts that he may not play in a certain event is a losing strategy for anyone that dares bet against him.

One of the marquee events on this year’s golf calendar is the Presidents Cup at Quail Hollow Club.

United States captain Davis Love III told the media ahead of this week’s RBC Heritage implied that any involvement Woods would like to have with the team, including playing in the event, the door is wide open.

“I mean, if he says, ‘You’re not captain anymore, I’m going to be the captain’, we’ll probably have to talk about that one,” Love joked. “But anything else, if he wants to be co-captain or assistant captain or player, whatever he wants to do.”

Woods was a player captain during the 2019 Presidents Cup in Australia and helped lead the U.S. to a 16-4 win over the Internationals.

“I’ve seen and talked to him a lot over the last year and a half and I know what he was working towards, but, you know, he’s unbelievable at overcoming whatever happens to him,” Love III shared.

“Whether it’s his swing or his putting or his body, he just can will his way towards his goals.”

It’s unknown whether or not Woods has the Presidents Cup circled as an event he’d like to play in this year. He’s certainly operating on a day-to-day basis on the course these days.