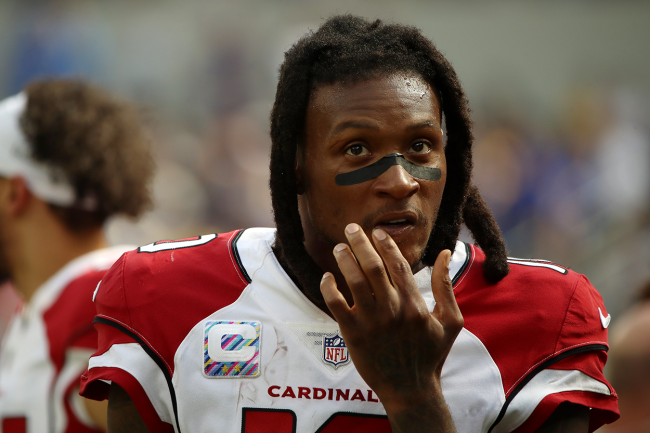 DeAndre Hopkins will not be on the field for the first six games of the 2022 NFL season. The 29-year-old wide receiver has been suspended for violating the league’s policy on PEDs and sent shockwaves across the NFL community.

Hopkins, who was coming back from injury near the end of the 2021 regular season, tested positive in November. Although the specifics of what popped positive have not been made public, the Cardinals’ top pass-catcher chose not to appeal the suspension.

That in itself is pretty telling. If you are innocent, you fight for your innocence, right?

Despite not doing so, Hopkins said that he was “confused and shocked” in a statement he put out on Monday night.

Here is what DeAndre Hopkins had to say about his suspension for PEDs:

The wording of his post raised quite a few questions. He sounded surprised that he tested positive in November and said that he would “get to the bottom” of what happened.

That is well and good, but how he went about defending himself was a bit strange.

He probably should have said: “in my 10-year NFL career, I have never used performance enhancing drugs.

Instead, he said that he “never tested positive.” WHY?! His PR team failed him there.

In addition, by saying that he “wasn’t careful enough” does not deny his guilt. He clearly isn’t trying to hide anything, which is respectable, but doesn’t change the fact that he took PEDs. It might have been better to simply, leave that part out.

Clearly, Hopkins is opening an informal investigation. Will anything come of it? Who knows.

Does it really matter? Nope, either way, Hopkins is not denying guilt. He broke the rules, plain and simple. Apologize and move on.